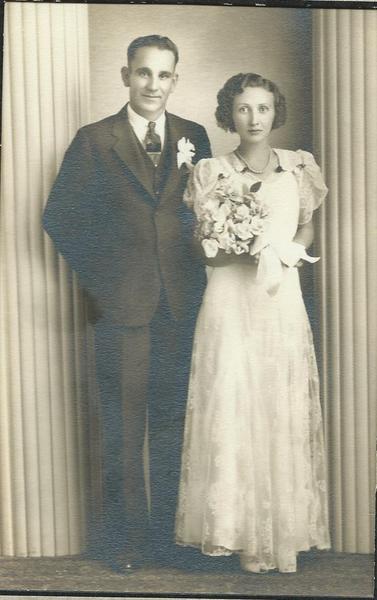 Rosary will be at 7:00pm Monday at the funeral home.

Agnes Lillian Peterka, daughter of Ernest and Mary (Diven) Homolac, was born February 25, 1919 near Munden, Kansas.  She passed from this life Thursday, September 18, 2014 at the Sunset Home in Concordia, Kansas. Agnes received her primary education at the Bethlehem Country School near Narka, Kansas. She was united in marriage to Edward Peterka September 25, 1940. They farmed on farms near Cuba and Belleville until retiring in the year 1984. At this time they moved into Belleville. Agnes was a wonderful cook and enjoyed preparing meals for family and friends. She loved music and together Edward and her enjoyed many a dance. In 1990, Edward became ill and they moved into the Lutheran Home where she continued to live following his death in 1991. She later moved to Sunset Home in Concordia. Besides her husband, Agnes was preceded in death by her parents; be her brother Joseph Homolac; sisters Mary and Helen Homolac, Marie Krob, Christina Halek, and Mildred Dosedlo. She will be forever remembered by her sister Alyce Hanney and husband Jack of Pittsburg, Kansas; and several nieces and nephews. A funeral mass was held Tuesday, September 23, 2014 at St. Edwards Catholic Church, Belleville, Kansas with Father Brian Lager officiating. Burial was in the Belleville City Cemetery. The Rosary was prayed by Deacon Steve Heiman Monday, September 22, 2014 at Tibbetts-Fischer Funeral Home, Belleville, Kansas. Memorials may be made to the church or Sunset Home in Concordia.

To order memorial trees or send flowers to the family in memory of Agnes Peterka, please visit our flower store.