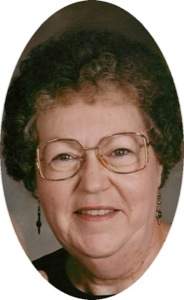 MEMORIALS:  To the family's choice to be designated later

Anna Mae Danielson, daughter of Joseph G. Kieffer and Catherine (L' Ecuyer) Kieffer, was born October 27, 1933, at rural Clyde, KS, and died August 30, 2013, at Republic County Hospital, at the age of 79 years, 10 months and 3 days. Ann, at the age of two years old, moved with her family, to Belleville, KS. Ann attended Belleville Public Schools and graduated from Belleville High School in 1951. On October 17, 1951, Ann was united in marriage to Elwin E. Danielson at St. Edward's Catholic Church in Belleville. To this union was born one son, Raymond. The couple resided at several farms north of Belleville, where Ann, in addition to her duties as homemaker and mother, was employed as a waitress at the Annex Cafe, located in the Republic Hotel on mainstreet in Belleville. Beginning in 1954, Ann started working at the Food Mart grocery store in Belleville, where she held many positions during her 46 years of employment. She was proud of the fact that she could manually check out groceries as quickly as the modern computerized scanners do today. She was one of only two employees to have worked at all three locations of the grocery store and was a well recognized employee during her years at the Food Mart. Ann was a member of several clubs, including the Belleville Eagles 32 81 Auxiliary, where she was a Past President. She was a member of the Concordia, KS, Women of the Moose until that organization was dissolved. She was currently a member of the Eagles Auxiliary at Junction City, KS. She loved to travel with her husband, Elwin, to State and National Eagles and Moose clubs and conventions to visit with the members of clubs in other cities and in several different states. Ann was preceded in death by her parents, three brothers, Father Henry J. Kieffer, John Kieffer, and Thomas Kieffer, and two sisters, Mary Popelka, and Judy Meis. She is survived by her husband Elwin, son Ray and wife Brenda of Belleville, two brothers, David Kieffer and James Kieffer, and three sisters, Theresa Baxa, Marge Walker, and Marilyn Wilson, one sister-in-law, Virginia Kieffer and one brother-in-law, Herb Meis, 47 nieces and nephews, and many friends and acquaintances in Belleville and the surrounding areas. Tibbetts-Fischer Funeral Home, Belleville, KS, is in charge of arrangements. Visitation will be from 1 PM until 8 PM, Monday, September 2, 2013, with the family receiving friends from 6 to 8 PM at Tibbetts-Fischer Funeral Home. Funeral services will be held at 10 AM, Tuesday, Sept. 3 at St. Edward's Catholic Church in Belleville, with Father Joseph Popelka and Father Brian Lager officiating. Burial will be at Rose Hill Cemetery, rural Wayne, KS.

To order memorial trees or send flowers to the family in memory of Anna Danielson, please visit our flower store.