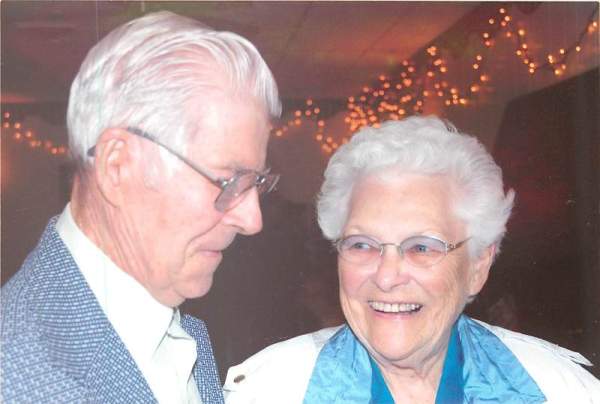 Wednesday visitation 11:30am till service time with family present at Christ Lutheran Church in Davenport, Nebraska.

Arlene Virginia (Keeler) Seifert or rural Clyde-Clifton, Kansas area, passed away Saturday, December 6, 2014 at the Republic County Hospital, Belleville, Kansas at the age of 95 years. She was born April 4, 1919 to August Carl and Clara Elizabeth (Fredericksen) Avers near Davenport, Nebraska, the eighth of nine children. She attended the Davenport school graduating the eighth grade. She was unable to finish high school due to having to work at home. She became good friends with her neighbor Waunita Keeler and three years later married her brother Lowell on January 23, 1938. They lived with her parents until their son Gordon was born.  Arlene and Lowell moved to their own home nearby and in 1946 their son Valdon was born. As a family they enjoyed going to the Belleville, Kansas fair, 4 th of July Celebrations, free town movies, and even a trip to the Black Hills and Kemmer, Wyoming. On January 30, 1985 Lowell suddenly died. A week later Arlene was visiting her son and her home and all of her belongings were lost to a fire. She moved to a trailer home in Davenport and lived there until August 21, 1993 when she married Dean Leon Seifert whose wife had died in 1991. They moved to Dean’s farm in the Brantford area and were involved in the farming operation. When Dean’s brother, the other half of the farming operation, died they had a farm sale and retired. Arlene loved to quilt and go to garage sales. She and Dean soon began to travel to various flea markets as vendors. They traveled to Fairbury, Hastings, Marysville, and even Salina. Arlene sold her quilts to those in nine different states and over 100 for the World Relief Organization. As her eyes were failing she gave up quilting, but took up Bingo. They traveled to many communities playing Bingo and she even won several large Jackpots. Arlene’s back injury and failing hearing eventually led to giving up her Bingo games. . She was a faithful member of Christ Lutheran Church of Davenport.  Arlene was a very hard worker throughout the years and a loving wife, mother, and grandmother. Although she lost her husband, home, grandson, two sons, a daughter-in-law, and her hearing and her spirits were shattered, Arlene carried on, never complaining, only occasionally asking why me? Arlene was preceded in death by her parents; husband Lowell; sons Gordon and Valdon, grandson Danny; daughter-in-law Shirley; sisters Gladys, Orva, Friedline and Bernice; and brothers Roy, Alvie, Burdette, and Merle. She will be forever remembered by her husband of 21 years Dean of their home; grandchildren, Paige (Jeff) Briggs, Littleton, CO, Brenda (Ron Schmidt) Keeler, Lincoln, NE, Kelly Bandt, Jeff (Lori) Keeler, Glenvil, NE, Michael Keeler and Brandon (Jona) Keeler, Lincoln, NE; 15 great grandchildren; step-daughter-in-law Joyce (Charles) Jones, Hickman, NE and their daughter Tina (Daniel) Carsinton, Lincoln, NE; nieces, nephews, other relatives and friends.

Funeral services were held Wednesday, December 10, 2014 at Christ Lutheran Church, Davenport with Pastor Kristen VanStee officiating. Burial was in Davenport City Cemetery. Memorials may be made to the Church or Republic County Hospital. Urbauer-Price Funeral Home of Davenport, Nebraska and Tibbetts-Fischer Funeral Home of Belleville, Kansas were in charge of these arrangements.

To order memorial trees or send flowers to the family in memory of Arlene Seifert, please visit our flower store.