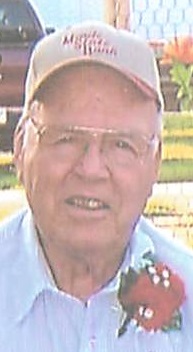 FAMILY WILL BE RECIEVING FRIENDS FROM 5:00PM TO 6:00PM AT THE FUNERAL HOME FRIDAY.

Arlie Ray Cox of Cuba, Kansas passed from this life peacefully in his home on March 25, 2015 on the eve of a gorgeous sunset. He was born Oct. 3, 1925 in Haddam, Kansas to Roy and Hallie Cox. Arlie grew up in the Haddam area. He attended the Crescent Country School and Haddam High School, graduating in 1942. After high school, he joined the army Oct. 14 th , 1944 as part of the U.S. Army Infantry stationed in Luzon Philippines. He served his country in WWII until Nov. 17 th , 1946. Arlie married Annemay Kennedy Oct. 10 th , 1947. The newlyweds made their home on a farm north of Haddam with two children Lonnie and Kayleen. Arlie provided for his family by farming the land. After a back injury, in 1954 he purchased a pool hall in Haddam, and the family moved to town. He always said, “It was the best living I every made as far as money—but the worst living for a family man.” He sold the pool hall in 1959, went to work for Boeing Aircraft, and moved his family to Douglass, KS. While working for Boeing, Arlie and his family lived in several states: Hagerman, NM, Caribou, Maine, and Douglass, KS. Arlie decided to make a career change and began working for the Soil Conservation Service in August of 1961 and moved to Ness City. After a short time in Ness City, KS, he was transferred to Meade, KS where he and his family lived for 37 years. Arlie retired from the Conservation Service Oct. 5 th , 1985. Arlie needed to stay busy, and wanted to be with people, so he decided to sell windows and siding for Home Steel Siding and started a guttering business. He called this income his “fun money.” He and Ann loved to travel so the “fun money” came in handy. They had many friends across the country. Arlie loved to visit. He never met a stranger. He could learn your life story in about 5 minutes of conversation. After losing Anne in 1997, Arlie married Dorothy (Rott) Zenger on Nov. 7 th of 1998 and moved to Cuba, KS. For 17 years, Arlie and Dorothy enjoyed traveling, attending ball games, and baking kolaches for family, friends and community events. They were avid supporters of the Haddam and Cuba communities. A highlight of their travels was the WWII Honor Flight to Washington, DC where they visited the WWII Memorial and saw the plane that saved Arlie’s life. Arlie was a life member of the American Legion and was very proud to have served his country. In honor of others that have served our county, Arlie was instrumental in establishing the Avenue of Flags in the Haddam cemetery. Each Memorial Day, he helped ensure the flags flew for services. Arlie was proceeded in death by his parents; Roy and Hallie; wife Annemay; his brother, Robert (Bobby); and twin sister, Audrey. He will be forever remembered by his wife, Dorothy; son Lonnie and Pattie, grandkids Gari Sue, Jason and Jessica, and great grandchildren Jadyn and Johnnie; daughter Kayleen and Clell Miller, grandchildren Mary and Bill with great grandson Michael, granddaughter Donna, grandchildren Andy and Monica with great grandchildren Deny with great-great grandchildren Denver & Dakota, Anna with great-great grandchild Jordain, and Abby with great-great grandchildren Jack & Hunter, grandson Joe and Adrian and great grandson Jake; grandson Robert with great granddaughter McKensie; grandson Jeremy and Tammie with great granddaughter Taly and great, great grandson Ethan, granddaughter Stacy and Brad with great granddaughters Ruby and Phebe; step-son Nick and Jenny Zenger with grandchildren Drew and Rachel and great grandson Jack Walter; step son Neil and Sandi with grandchildren Dusty, Tyler and Jacki; and step daughter Nancy and Dan Beneda with grandchildren Cole and Celsey. Arlie’s Celebration of Life will be held at 3:00 pm Saturday, March 28 th , 2015 at the Methodist Church in Haddam, Kansas. With Pastor Randy Jellison-Knock officiating. Burial will be in the Haddam Cemetery with Military Rites by the Fort Riley Army Honor Guard and Members of the American Legion. Memorials in Arlie’s honor may be made to the Church or Meadowlark Hospice. Tibbetts-Fischer Funeral Home, Belleville, Kansas assisted the Cox family with these arrangements.

To order memorial trees or send flowers to the family in memory of Arlie Cox, please visit our flower store.