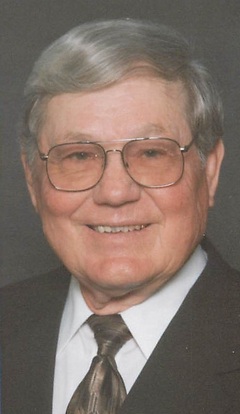 Benny Lee Holloway, son of Vearl and Tillie (Vocasek), Holloway was born March 23, 1930 on his parent’s farm southeast of Narka, Kansas. He passed away suddenly Wednesday, January 14, 2015 at his home south of Narka. He was 84 years, 9 months, and 21 days of age. Benny attended Round Grove country school and Narka High School graduating with the Class of 1948. He furthered his education at Kansas State University for two years until he was drafted into the United States Army and served his country for two years. On September 6, 1953 Benny was united in marriage to Marcie Horak at Munden, Kansas and to this union was born twin sons Richard Dee and Randall Lee. The couple then made their home in rural Narka, Kansas. He spent his life as a farmer, stockman and truly loved all aspects of the farm.  Benny was a member of the Narka Presbyterian church where he served as Elder, other church offices and on several committees. He was a 60 year member of the Masonic Lodge. He was very active in the local lodge and served several years as a Grand Lodge Officer. He was also a 50 year member of the Eastern Star and was very helpful to Marcie as she served five years in the State Offices. Benny had a true passion for health care, especially in our local area. He served 36 ½ years on the Board of Directors of Republic County Hospital. He was Chairman of the Board for many years. He loved sports of all kinds, especially K-State and the Kansas City Royals. Benny was preceded in death by his parents and infant brother Richard. He will be forever remembered by his wife Marcie of their home; twin sons Randall of Narka and Dr. Richard and wife Kim of Belleville; four grandchildren; two great grandchildren; brother William and wife Lorene, Narka; many nieces and nephews and a host of friends.

Funeral services were held Saturday, January 17, 2015 at the Presbyterian Church, Narka, Kansas with Pastor Phil Goombi officiating. Burial was in National Cemetery south of Narka. Masonic rites were conducted by Belleville Lodge No. 129 A.F. & A.M. Military Honors were presented by American Legion Post 345 of Cuba, Kansas. Memorials may be made in Benny’s honor to the Republic County Hospital or the Narka Presbyterian Church. Tibbetts-Fischer Funeral Home assisted the Holloway family with these arrangements.

To order memorial trees or send flowers to the family in memory of Benny Holloway, please visit our flower store.