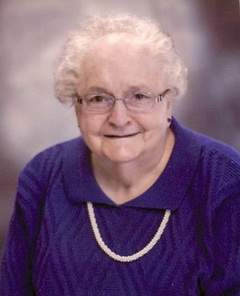 MEMORIALS MAY BE MADE TO THE MANNA HOUSE OR MOUNT JOSEPH SENIOR VILLAGE CHAPEL, CONCORDIA, KANSAS.

Bernadine Lillian Swiercinsky, the youngest child of Alcid Edward Breault and Marcella Melvina Melancon, was born on January 24, 1928, in Clyde, Kansas.  She passed away on June 12, 2017, at Mount Joseph Senior Village in Concordia, Kansas.

Bernadine (Bernie) grew up in Clyde with her three siblings, Emma Rose Desilet, Leroy and Laurence.  Her father died before her third birthday and her family eventually moved to Concordia.  On June 17, 1944, she married Bert O. Lane and they had two children, James Leland and Julie Ann.  Bert died in a tragic accident in 1961.  Bernie married Gerald T. Swiercinsky on April 4, 1964, in Belleville, Kansas.  They farmed in the Belleville area, and later moved to Beloit, Kansas to be closer to family.  Gerald died in 2006.  Due to health issues, she moved to Mount Joseph in Concordia in late 2014.

Bernadine started working at an early age that included 43 years in the medical field as a certified nurse’s aide and later as a medication aide.  She enjoyed getting to know people and learning how they connected to others.  No matter her personal circumstances, she sought the best in other people.

She was preceded in death by her husbands, parents, siblings and three nieces.  Survivors include her children, James (Cindy) of Beloit, Kansas, and Julie (Guy) Steier of Clyde, Kansas, ten grandchildren and 19 great grandchildren.  Other survivors include her three sisters-in-law, Gertrude Breault of Concordia, Lorene Berggren of Grand Island, Nebraska, Kathryn Swiercinsky of Georgia, a brother-in-law, Tom (Carol) Swiercinsky of San Antonio, Texas, and numerous nieces and nephews.

Her Funeral Mass was celebrated on Saturday, June 17, 2017 at St. Edward Catholic Church, Belleville, Kansas. Celebrants were Father David Metz and Father Charles Steier. Concelebrants were Fathers Henry Baxa, Father Steve Heina, and Larry LeTourneau. Burial was in the Belleville City Cemetery. Memorials may be made to the Manna House, Mount Joseph Senior Village Chapel or the charity of the donor’s choice. Tibbetts-Fischer Funeral Home was in charge of these arrangements.

To order memorial trees or send flowers to the family in memory of Bernadine Swiercinsky, please visit our flower store.