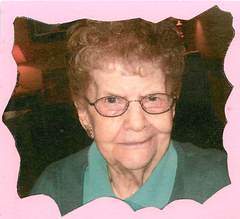 Bernice Mae (Grubbs) Sorell, 89, daughter of Charlie and Libbie (Jakabosky) Grubbs, was born on August 25, 1927 in Mahaska, Kansas and passed away on August 29, 2016 in Fairbury, Nebraska. She married Johnny Sorell on March 8, 1947 and together they had one daughter, Joyce. Bernice is preceded in death by her parents Charlie and Libbie, husband Johnny, grandson Jimmy Shepek, brothers Ervin and Victor, and sister Eva Devio. Survivors include daughter Joyce and husband Jim Shepek of Fairbury, Nebraska, and grandson Jory Shepek of Fairbury, Nebraska. Private family graveside services were held at the Mahaska Cemetery, Mahaska, Kansas. Tibbetts-Fischer Funeral Home assisted the family with arrangements.

To order memorial trees or send flowers to the family in memory of Bernice Sorell, please visit our flower store.