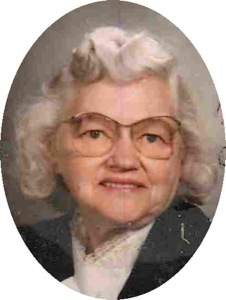 Bessie Marie Watson, daughter of Dr. Claude and Ethel (Dooley) Parkhurst, was born July 4, 1916 at Wayne, Kansas. On Friday, September 2, 2011 was escorted to Heaven on the wings of angels to be with her Lord. She was 95 years of age. When she was very young, her parents moved to Indiana for a few years and she began her early education there. They returned to Republic County first living in Munden where she attended school and then settling in the Belleville area and Bessie graduated from Belleville High School. Bessie was married to Carl Hyatt in 1936 and at an early age Carl died. She later married Francis Watson and together they had two children Suzanne Marie and James Lee. Bessie was the Clerk of the Board of Education in Belleville for over 30 years. She was a loyal BHS Buff and loved being a part of every student's life. She never missed a BHS Alumni Banquet so she could renew her bonds each year. Bessie is a life member of the National Educational Secretaries Association and was selected to be a delegate to go around the world with the Dwight D. Eisenhower People to People program. They traveled in many foreign countries. Bessie loved Belleville, serving on committees, the Library Board during its expansion, and the first to start a fund to get Rocky pond cleaned up and made into a wonderful recreational spot for the community and visitors alike. Her second home was the First United Methodist Church of Belleville since 1944. She seldom missed Sunday school and church service and served on committees and went to the circle meetings. Bessie joined the American Legion Auxiliary in 1936 and was a Past President and served in various capacities. She was preceded in death by her parents; her husband's Carl and Francis; and brother Leon Parkhurst. Bessie will be forever remembered by her children Suzi Watson, Edmond, Oklahoma and James "Jimmie" Watson and wife Linda of Athens, Alabama; grandchildren Julie Head and husband Jeff and their children Savannah and Harper; and John P. Watson and wife Vicki and their daughter Orianna; two nieces, cousins, and her adopted families The Morgan's, Derowitsch's, Menken's, and the Wall's.

Funeral services were held Wednesday, September 7, 2011 at the First United Methodist Church in Belleville, Kansas with Pastors Lennie Maxwell and Mark Imel officiating. Burial was in the Belleville City Cemetery. Memorials may be made to the Republic County High School Scholarship, First United Methodist Church or Republic County Museum. Tibbetts-Fischer Funeral Home, Belleville, Kansas was in charge of these arrangements.

To order memorial trees or send flowers to the family in memory of Bessie Watson, please visit our flower store.