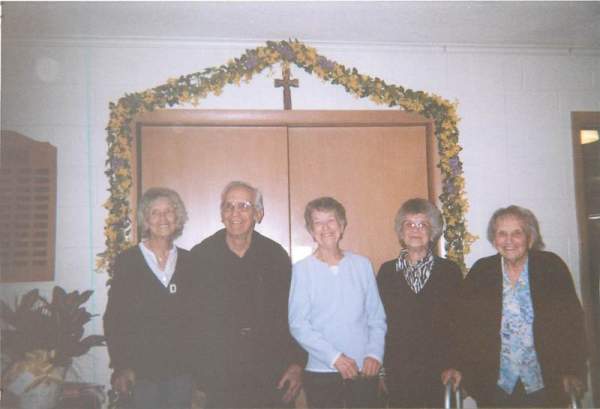 DIRECT CREMATION WAS CHOSEN NO VISITATION. BOOK MAY BE SIGNED DURING THE WEEK AT THE FUNERAL HOME.

Betty Eileen Hess was born February 7, 1928 to John and Agnes (Rieke) Hess in Greenwood, Nebraska. Shortly thereafter they moved to Narka, Kansas and while living there her mother became ill and passed on at an early age. While in her teens, Betty moved to a little farm on the edge of Belleville. This would be where she graduated from high school in 1946. Betty worked at Arbuthnot Drug store and this is where she met Garold Allen. They were married on October 8, 1950 and made their home on a farm just north of Courtland, Kansas. In 1966 they welcomed their son Michael into their home and a year later their daughter Michele came along. Betty enjoyed a variety of things over the years from being a great homemaker and cook, selling Avon products to working at the Courtland Vet Clinic. In 1991 she and Garold retired from the farm and moved into Courtland. She had many hobbies like playing cards with friends and neighbors, bingo, and going to the casinos (sometimes twice a week). Betty passed from this life to be with Garold in the early morning hours on her birthday Saturday, February 7, 2015 surrounded by family and loved ones at the Republic County Hospital, Belleville, Kansas. Betty will be forever remembered by her son Michael; daughter Michele (Bradley) Hudson; grandchildren Sharla (Brandon) Philbrook, Crystal (Earl) Dunstan, and Craig Henderson; great grandchildren Kamilee & Leilani Kapua, Leiana Philbrook, Aubrey & Paisley Dunstan, Cash Henderson; sisters Gladys Moline, Ardith Stone, Blanche McCall, and brother Fred (Audrey) Elyea. She was preceded in death by her parents; in-laws; husband Garold in 2012; great grandson Cayden Dunstan; sister Laura, and brother Stanley; also aunts, uncles, cousins and many friends. Betty’s bright smile and hospitality will be greatly missed by all who knew and loved her. Memorial services will be 2:00 PM Friday, February 13, 2015 at the United Methodist Church, Courtland, Kansas with Pastor Kathy Aeillo officiating. Inurnment will follow the service at Mt. Pleasant Cemetery, rural Courtland. Memorials in Betty’s honor may be made to the Courtland Methodist Church. Betty chose direct cremation, there will be no visitation. Tibbetts-Fischer Funeral Home, Belleville, Kansas, assisted the Allen family with these arrangements.

To order memorial trees or send flowers to the family in memory of Betty Allen, please visit our flower store.