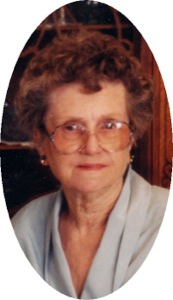 Betty Ann Hedges, eldest child of Wilbur and Anne (Holtberg) Hedges, was born in on May 25, 1926. She passed from this life Wednesday, May 5, 2010 at her home in at the age of 83 years. Betty received her education at the John Brown rural school and the . She was united in marriage to Quentin R. Engwall on November 28, 1946 and to this union three daughters and a son were born. Betty lived in until 1933 when the family moved to the Hedges farm northwest of Courtland. She lived in with her family and worked at Boeing during WWII. Later she worked for Sears in and as admissions clerk for in and in Concordia. Betty lived in for 27 years before retiring in Courtland. While in she was quite involved in the and the Salina Symphony Guild. Living in Courtland Betty was active in Pride Club, Crusaders Club, and the Art Guild. She was a faithful member of . Betty was preceded in death by her parents; and her husband Quentin in March of 1996. She will be forever remembered by her children: Susan Honea, North Richland Hills, Texas, Dianne Neustrom and husband Michael, Bennington, Kansas, Dwight Engwall and wife Sonja, Derby, Kansas, and Sandy Sasarita and fiance' John Dredla, Las Vegas, Nevada; her grandchildren: Karen Melton and her children Jordan, Jenna and Dylan Drane; Amanda & Brian Melton and children Breck Knoblauck, Mya and Lilla Terry; David Melton; Nicole Kaempfe and children Remington and Hanna Kaempfe; Stephanie Wallingford and children Allegra, Anissa and Aidan Wallingford; Chelsea & Jacob Stebbins; Evan Engwall; Tony Nation; Adam Sasarita; Spencer Sasarita; her sisters Joyce (Dave) Morrow, Round Mountain, California, and Shirley Talbott, Vancouver, Washington; her brother Charles (Yvonne) Hedges, Lawrence, Kansas; many other relatives and a host of friends.

Funeral services were held Monday, May 10, 2010 at , with Pastor Delvin Strecker officiating. Burial was in . Memorials may be made to the Church, or Hospice Care of Kansas.

To order memorial trees or send flowers to the family in memory of Betty Engwall, please visit our flower store.