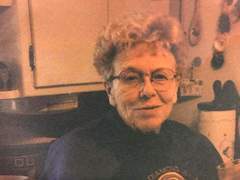 Betty's wishes were for direct cremation and a family inurnment at a later time.

Betty E. Frye, daughter of Guy and Mildred (Palmer) Swaney, was born May 29, 1930 in northern Republic County, Kansas. She passed from this life Sunday, February 12, 2017 at the Long Term Care facility in Belleville, Kansas at the age of 86 years. She graduated from Byron High School. On April 25, 1950 she was married to Verne A. Frye and to this union six children were born: Tracey, Trisha, Tyra, Todd, Troy, and Terry. Betty was preceded in death by parents; husband Verne in 1973 and son Terry in 2005. She will be forever remembered by her children; Tracey Helmick, Fall City, Nebraska, Trisha Frye, Ruskin, Nebraska, Tyra Frye (Lannie Hanel), Belleville, Todd (Teresa) Frye, Belleville, and Troy (Berdina) Frye, Belleville; 7 grandchildren; 11 great grandchildren; 3 great, great grandchildren; her sister Denelda Huckins, Wichita; other relatives and a community of friends. Betty requested direct cremation services. A family inurnment service will be held at the Belleville City Cemetery at a later time. Tibbetts-Fischer Funeral Home, Belleville, Kansas, assisted the Frye family with these arrangements.

To order memorial trees or send flowers to the family in memory of Betty Frye, please visit our flower store.