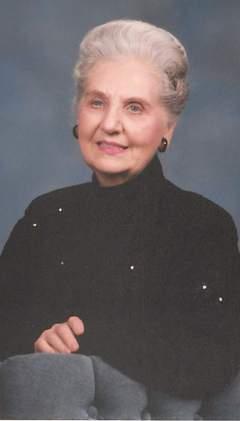 Betty Lang, daughter of Charles and Vera (Teeter) Kalivoda, was born April 20, 1916 at Cuba, Kansas and died at Belleville, Kansas Wednesday, October 25, 2017 at the age of 101 years. Betty was preceded in death by her parents; infant sister, Nellie; older sister Gladys Kalivoda Knedlik, and a younger brother Neil Kalivoda. She received her education at Agenda Elementary and High School, and college at KSAC in Manhattan, Kansas. She taught school in Republic County and Washington County Kansas. Betty moved to California in 1958 where she came to indulge a passion for interior design, fashion and oil painting. She received several years’ guidance in that medium from a respected Bay area artist. Betty was well known as a “retail warrior” and “fashion guru” by many friends and family. On May 28, 1940 Betty was united in marriage to Louis D. Close of Belleville, and to this union were born two sons: Jeffrey L. and Jay T. Close. Louis Close preceded her in death in 1953. On May 20, 1957 she was united in marriage to John D. Lang. They lived in San Lorenzo, California for over thirty years. Her husband John preceded her in death in 1989. Betty returned to her home area of Belleville, Kansas in 2014. Betty was a member of Chapter MO of P.E.O. while a resident in San Lorenzo and transferred her membership to Chapter BM in Kansas on her return to Belleville. She attended San Lorenzo Community Church, but was a lifetime member of the Belleville United Methodist Church. Betty was a former member of the Shakespeare Club, Belleville. Betty is survived by two sons, Jeffrey of South Royalton, VT and Jay and wife Susan of Clover, SC. She is also survived by a step-son John Lang and wife Enid and family of Springerville, AZ. Also mourning her passing are nephew Mike Knedlik and wife Lela, Belleville, KS who were her constant advocates after her return to her home state. Betty is also survived by nephews Scott Kalivoda and family, Olathe, KS, Kent Kalivoda, Agenda, KS. Nieces Jayne (Mark) Kalivoda Lund and family, Green, KS and Sue Knedlik Walker, Fresno, TX. Step-niece Dana (John) Bates Metzke, Cheyenne, WY and step-nephew Lang Bates, Oswego, OR, as well as many great nieces, nephews, extended family and friends.

To order memorial trees or send flowers to the family in memory of Betty Lang, please visit our flower store.