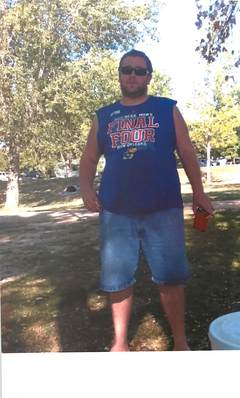 Billy Joel “B.J.” Webb, son of Rhonda Webb and Curtis Lewellyn, was born July 15, 1980 at Belleville, Kansas. He grew up in the Belleville community attending Belleville High School and eventually received his Graduate Equivalency Diploma. Billy was married to Mandee Ward on April 29, 2001 in Belleville. He is survived by Mandee and their children Charlee and Cameron.  He worked in agriculture at various area Elevators doing a variety of jobs throughout the years. Billy was an outdoors enthusiast enjoying his family and friends especially treating them to his barbecuing expertise. He was an avid Kansas Jayhawk fan and let everyone know it. Billy was the happiest when he was with his family. His life on this earth ended all too soon Sunday, June 15, 2014 just shy of his 34 th birthday. Billy will be forever remembered by his wife, children and mother of Belleville and his father of Beloit; brothers Chance (Pam) Mitchell, Concordia and Chasey (Kelsey) Hitchcock, Solomon; brother C. J. Lewellyn; grandparents Don & Barbara Lewellyn, Belleville; mothers-in-law Brenda Ward and Tina Simmons, Belleville; many aunts, uncles and cousins; other relatives and many friends.

To order memorial trees or send flowers to the family in memory of Billy Webb, please visit our flower store.