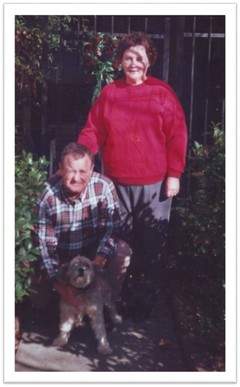 Carol Frances Copening , daughter of Dr. Victor Carl and Eula Mae Celeste Hurtig, Sr., was born in Concordia, Kansas on April 13, 1930 and passed away on February 20, 2016 at Hands to Lend Personal Care Home in Houston, Texas. Carol graduated from Courtland High School in 1948 where she was a cheerleader, played the cornet and was a piano accompanist for the school. She also was a member of Courtland United Methodist Church. She earned a Bachelor's Degree in Home Economics from Kansas State University where she was a member of Kappa Delta Sorority.  While attending K-State, Carol met Ward Lawrence Copening and they were united in marriage on June 14, 1953.  Carol was a Home-Economics teacher and taught in Ellsworth and Simpson, Kansas while her husband, Ward, was serving in the military in Korea.  She also taught while they lived in Citronelle, Alabama for two years. Carol spent the majority of her life taking care of her husband and four daughters.  She was an avid reader, enjoyed gardening, a skilled seamstress and spent hours creating beautiful needlepoint pieces and collecting antique glass.  She was a loving daughter, wife, mother and grandmother and her family was the most important part of her life.  She treasured the memories of her life in Kansas and she leaves behind memories her family can cherish forever.   She was preceded in death by her husband Ward in March 2012, her parents and her sister, Virginia Hurtig Henson.   Carol is survived by her four daughters, Claire Copening and Brian Kronick of Katy, Texas, Susan Yarrow (Wayne) of Hattiesburg, Mississippi, Jennifer Irwin (Don) of Mandeville, Louisiana and Gail Kramer (Patrick) of Pearland, Texas and  her eight grandchildren.  Lindsey Wilbur (Christopher) of Manitou Springs, Colorado, Trey Bishop of Los Angeles, California, Kadi Bishop of Hattiesburg, Mississippi, Donnie and Ashley Irwin of Mandeville, Louisiana and Patrick, John and James Kramer of Pearland, Texas.  She is also survived by two great-grandchildren, Alexander and Susanna Wilbur and two brothers, John Hurtig (Barbara) of Pueblo, Colorado, and Dr. Victor C. Hurtig (Carlene) of Courtland, Kansas, nieces, nephews and lifelong friends.  Graveside inurnment service will be held 2:30pm Saturday, July 9, 2016 at the Courtland Cemetery.

Ward Lawrence Copening , 82, a former long-time resident of Tomball, Texas, passed away Saturday, March 24, 2012 in Collins, Miss., at the State Veterans Home.  He was born in Iola, Kan., on February 14, 1930 to the late R. Lawrence and Ruth Copening. Ward attended Iola, Kansas schools and was chosen in his senior year as a guard for the Kansas All-State football team.  He was recruited by Kansas State University and received a football scholarship.  In 1952, Ward graduated from Kansas State University with a Bachelor of Science in Geology where he was also a member of Delta Tau Delta Fraternity and received a ROTC Commission to second Lieutenant. Ward served in the Infantry division of the U. S. Army from 1952 to 1954, earning paratrooper wings and spending a year in Korea. In January 1955, he was hired by Dowell, a division of Dow Chemical, as an engineer.  He served at Dowell stations in Texas, New Mexico, Louisiana, Mississippi and Alabama, and in the offices of New Orleans, La. and Houston, Texas.  In 1989, Ward was credited with developing a patent for cement slurry.  He retired as Engineering Manager after 30 years.  Following retirement, Ward taught geological engineering at Mississippi Gulf Coast Community College at Perkinston, Miss., and consulted for various companies. Ward is survived by his wife, Carol, of the home and four daughters; Claire Copening, Katy, Texas; Susan Yarrow (Wayne), Hattiesburg, Miss.; Jennifer Irwin (Donald), Mandeville, La.; Gail Kramer (Patrick), Pearland, Texas. Eight grandchildren; Lindsey Wilbur, Trey Bishop, Kadi  Bishop, Donnie Irwin,  Ashley  Irwin,  Patrick Kramer,  John Kramer,  and James Kramer and one great grandchild, Alexander Wilbur.  Ward is also survived by his two sisters, Martha Kellstrom, Manhattan, Kan. and Caroline Ratcliffe, Lexington, Mo. Ward spent many enjoyable years riding motorcycles.  He belonged to the Retreads and the BMW Riding Clubs.  He enjoyed his family, the outdoors, animals and life in general.  His sense of humor was unique and he will be missed dearly.

To order memorial trees or send flowers to the family in memory of Carol & Ward Copening, please visit our flower store.