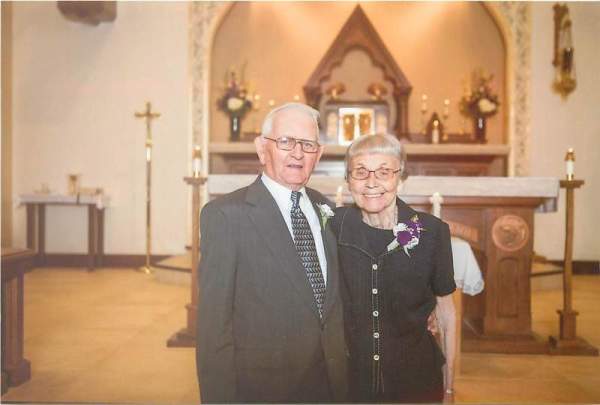 Catharine A. Pachta (82), Belleville, KS was born on December 3, 1933 to Edward and Martha (Shimanek) Stehno, south of Munden, KS, and died on March 26, 2016 surrounded by family. She married Joseph V. Pachta on August 16, 1954 and to this union four children were born; Janet, Jim, Julie, and Jon. She was preceded in death by her parents; one brother, Jim Stehno; and one grandson, Patrick Galligan. Catharine worked side by side with her husband Joe on their farm outside of Munden for over 60 years, raising cattle, pigs, chickens and crops. She also cared for many pet cats and dogs. She loved to garden and canned and froze much of the food that fed her family over the years. Every Saturday while raising her children, she baked fresh kolaches and rohliks. Family was very important to Catharine. Her home was always a gathering place for immediate and extended family celebrations. All of her grandchildren loved going to “The Farm,” camping out on her living room floor and eating her good food. Catharine was a dedicated wife, mother and grandmother, who cherished her Catholic faith and instilled in her children the importance of faith, family and education. For many years she was an extraordinary minister of Holy Communion, taking the Eucharist to many sick and homebound people. She taught CCD for many years and was involved with the St. George Altar Society, serving in many different capacities. She often served as a lector at church. She will be forever remembered by her husband Joe of 62 years; her four children Janet and Larry Galligan, Kennebunk, ME; Jim and Marilyn Pachta, Linn, KS; Julie and Dan McLaughlin, Olathe, KS; and Jon and Renee Pachta, Wamego, KS; grandchildren Chris and wife Ella, Matthew and wife Nicole, Andrew and wife Dixie, Melissa and friend Levi, Ian and wife Brice, Elyse and husband Damian, Ryan and fiancée Anna, Megan, Catharine (Caty), Kelsi, Aaron and Emily; and four great-grandchildren Paul, Michael, Jacob and Mark. She is also survived by a sister, Theresa (Mike) Donahue of Wilmington, NC, and a brother, Ed (Donna) Stehno of Hays, KS, and the late Jim Stehno’s wife Rita of Munden, KS, and many other relatives and friends. A mass of Christian Burial will be held on Friday, April 1, 2016 at 10:00am at St. Edward’s Catholic Church, Belleville, KS, with burial at St. Katharine’s Cemetery, rural Belleville, KS. A rosary and memorial service will be held on Thursday, March 31, 2016 at 7:00pm at St. Edward’s Catholic Church, Belleville, KS. Memorials can be made to the Sisters of St. Joseph, Concordia, KS or St. Edward’s Catholic Church, Belleville, KS. Tibbetts-Fischer Funeral Home assisted the family with arrangements.

To order memorial trees or send flowers to the family in memory of Catharine Pachta, please visit our flower store.