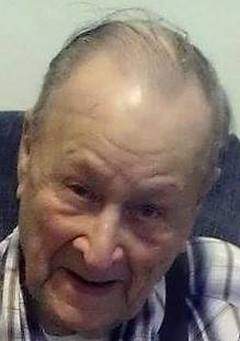 Clarence "Bud" Frank Berggren was born May 9th, 1927 in Scandia, KS, the first born to Grant and Thora (Albro) Berggren. Bud served two terms in the Navy. The first during WWII in Hawaii, and the second term in the Philippines during the Korean War. After leaving the service Bud worked for the railroad, the Missouri Pacific for nine years and the Rock Island for two years. He also worked for the Republic County Road & Bridge Department as a motor grader operator until his retirement. On August 3rd, 1954 Bud married Norma (Noble) Cline in Boulder, CO and thus began their journey of 57 years of marriage. Along with her 3 children Donna, Gary and Bob, they added Paula two years later to round out their family. Shortly after their marriage, Bud moved the family to Republic, KS where they lived until 1963 when they relocated to the Berggren family farm in rural Scandia where he grew up. Bud started farming and raising various livestock while continuing his job with Republic County until he retired. Bud and Norma moved into Scandia in 1999 where he lived until 2014 when he moved to Lyons, KS to Country Place Assisted Senior Living – meeting new people and living the easy life until he was rejoined with his beloved on Thursday, October 8th, 2015 in Lyons, KS at the age of 88 years. He was preceded in death by his parents, his wife Norma, daughter Donna Derowitsch, and twin sisters Norma Scrivner & Nina McIntyre. He will be forever remembered by his sons Gary Cline of Scandia, KS; Robert "Bob" Cline and wife Pat of Belleville, KS; daughter Paula Swenson and husband Roger of Lyons, KS; son-in-law Lloyd Derowitsch of Scandia, KS; 9 grandchildren and 4 great grandchildren; sister Donna Reed and husband Paul of Broken Arrow, OK; and sister-in-law Evelyn DuBose of Brawley, CA. Funeral services will be held Monday, October 12, 2015 at 10:30 A.M. at Tibbetts-Fischer Chapel, Belleville, Kansas. Burial will follow in Prairie Rose Cemetery south of Republic, Kansas. Memorials may be made to the Family’s Choice to be designated later. Tibbetts-Fischer Funeral Home, Belleville, Kansas was in charge of these arrangements.

To order memorial trees or send flowers to the family in memory of C. F. Berggren, please visit our flower store.