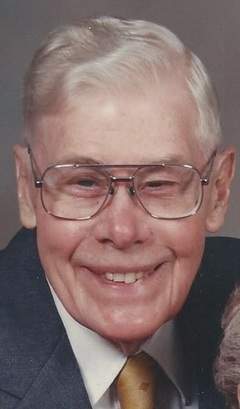 Family will greet friends and family at funeral home Friday 5pm to 7pm. Memorials may be made to the Pike Valley Elementary Student Technology Curriculum in care of the funeral home.

Chester LeRoy Garman, age 91, of Courtland died Tuesday, November 18, 2014 at the Long Term Care home in Belleville, Kansas. He was born May 18, 1923 in Courtland, Kansas to Lloyd and Esther (Anderson) Garman. Chet graduated from Courtland High School in 1941 and Kansas State College of Agriculture and Applied Sciences in 1945 with a degree in Electrical Engineering. He was a member of Sigma Tau Epsilon Chapter and Eta Kappa Nu Association of Beta Kappa Chapter. On February 10, 1946, he married Kathleen Buss in Osborne, Kansas and to this union three children were born. In 1945, Chet joined his father in the Garman Oil and Implement Company in Courtland, which was later changed to L.E. Garman and Son Implement Company and then Garman and Sons Inc. He was proud to have his two sons join him in the business. Chet retired in 2012 after being a dedicated successful Courtland businessman for 66 years. He served on the Courtland City Council, was a member of the Community Club and the Masonic Lodge. His hobbies were amateur radio, target shooting, and going to work every day. He enjoyed being a K-State alumnus and reminiscing about his college days while working at the power plant and meeting Kathleen. Chester was preceded in death by his wife Kathleen in 2007; his parents Lloyd and Esther, and his sister Phyllis Oliphant. He will be forever remembered by his two sons, David and wife Deb of Formoso and Tim and wife Kerri of Courtland; daughter Laureli Kitchener and husband Harry of Concordia; sister-in-law Donna Buss of Osborne; three grandchildren; five great grandchildren; a great, great grandson; other relatives and friends. Funeral services were held Saturday, November 22, 2014 at the United Methodist Church, Courtland, Kansas with Pastor Kathy Aeillo officiating. Burial was in the Courtland Cemetery. Masonic services were conducted by Courtland Lodge 211 A.F. & A.M. Memorials may be made to the Pike Valley Elementary Student Technology Curriculum. Tibbetts-Fischer Funeral Home, Belleville, Kansas assisted with these arrangements.

To order memorial trees or send flowers to the family in memory of Chester Garman, please visit our flower store.