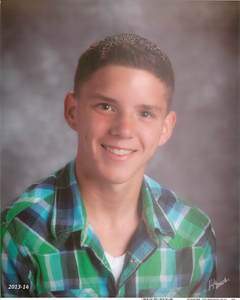 Connor Michael Strutt, son of Kendall and Christine (Ray) Strutt, was born November 28, 1997 in Belleville, Kansas, and passed away at Children’s Mercy Hospital in Kansas City on August 20, 2016 at the age of 18 after a 2 year battle with cancer.

Connor grew up in Belleville and attended the Belleville Schools, graduating from Republic County High School with the class of 2016.  From a young age, Connor had a passion for animals. In his eighteen years, he had many, many animals, too numerous to mention. He enjoyed spending time working with his cows, going to cattle shows as well as showing at the county fair. Connor was also an avid athlete, running cross country for 4 years, playing basketball for many years, and his most accomplished and greatest love, pole vaulting. He truly valued his family and friends, and cherished the time he had to spend with them. Connor was known for his smile, which could light up any room he walked in to. He touched so many lives, from those who knew him all his life to those who had only known him the last couple of years. He left an impression everywhere he went.

Survivors include his parents Kendall and Christine of Belleville; brother Kyle of Woodston and sister Karlie of the home; maternal grandparents Bill and Loretta Ray of Norton; paternal grandparents Vernon and Diane Strutt; many aunts and uncles, cousins, and special friends and he will truly be missed by all. Burial will be in Pleaseant Hill Cemetery, rural Belleville, Kansas.

Memorials to the Connor Strutt Memorial

To order memorial trees or send flowers to the family in memory of Connor Strutt, please visit our flower store.