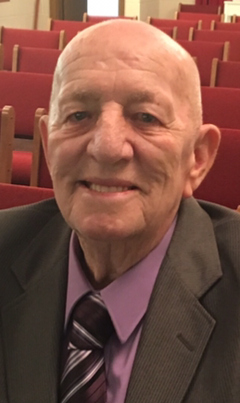 Dale Lee Baxa, son of Stanley and Mabel (Johnson) Baxa, was born September 16, 1931 at Morrowville, Kansas. His family moved to Cuba, Kansas and he attended school there, graduating from Cuba High School with the Class of 1949. Following graduation Dale enlisted into the United States Air Force, January of 1951. He served his country proudly and was honorably discharged in October of 1953. Dale returned to Republic County and on April 16, 1960 he was married to Marjorie Faye Brown of Republic, Kansas and to this union of nearly 55 years, two children were born, Steven and Denise. Dale and Marjorie made their home in rural Republic. Throughout his life, he worked as a mechanic and over-the-road truck driver, and enjoyed farming their land. He enjoyed dancing, playing card and dice games, and traveling. Dale was a member of the Elks and Eagles clubs, the American Legion, and a long time member of the Masonic Lodge. He was preceded in death by his parents; wife Marjorie; and grandson Dylan Woodward. He will be forever remembered by his children, Steven & Sheri Baxa, Salina, Kansas and Denise & Jeff Woodward of Belleville, Kansas; grandchildren, Haley Killough, Drew Baxa, Derek Baxa, Margaret Woodward, and Riley Woodward; sister Vera Corp, Portland, Oregon; several nieces and nephews; other relatives and a community of friends.

Funeral services were held Tuesday, May 2, 2017 at the United Methodist Church, Republic, Kansas with former Pastor Roger Walls officiating. Dale wanted cremation following his service and family will have an inurnment service later at Lake Cemetery, rural Republic. Masonic rites were conducted by the Belleville Masonic Lodge and Military Honors were conducted by the United States Air Force Honor Guard, McConnell Air Force Base, Wichita. Memorials may be made to the Republic Methodist Church. Tibbetts-Fischer Funeral Home, Belleville, Kansas assisted the Baxa family with these arrangements.

To order memorial trees or send flowers to the family in memory of Dale Baxa, please visit our flower store.