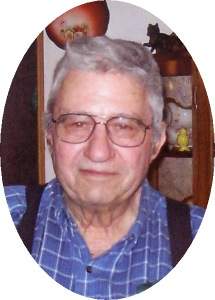 Dale LeRoy Chizek of , was born August 7, 1932 to John and Albina (Tuma) Chizek near . He passed from this life Tuesday, May 31, 2011 at the in at the age of 78 years. He was preceded in death by his parents; brother Dan; daughter Gloria Chizek; and grandson Alan Chizek. Dale spent his life on the farm working the land and raising livestock. He was united in marriage to Ruby Jarrett on April 29, 1951 and to this union four children were born: Guy, Gloria, Dala, and Renna. Dale and Ruby celebrated their 60 th anniversary May 1, 2011. Through out his life, Dale enjoyed music, playing guitar with family, friends, and neighbors. In later years he and Ruby would travel around the country following guy's bands to listen and dance to their music. For 20 years he and cousin Joe Chizek went door to door in as Santa Claus (Joe) and the Easter Bunny (Dale) distributing goodies, smiles, and hugs. His hobbies also included restoration of antiques such as tractors, trucks, guns, and toys. Dale will be greatly missed, but forever remembered by his wife Ruby of their home, son Guy and wife Karla of Clyde, Kansas, daughters Dala Chizek of Marianna, Arkansas and Renna Baldwin and husband Todd of Huntsville, Arkansas; grandchildren Carl Chizek, Amber Thomas and husband Patrick, John Williams, and Vanessa Holt and husband James; great grandchildren Evan and Avrie Thomas, Aedan and KayAnn Holt; other relatives and many friends.

Funeral services were held Saturday, June 4, 2011 at the Cuba Presbyterian Church with Pastor Phil Goombi officiating. Inurnment was in the . Memorials may be made to the Agenda Cemetery Fund. Tibbetts-Fischer Funeral Home, was in charge of these arrangements.

To order memorial trees or send flowers to the family in memory of Dale Chizek, please visit our flower store.