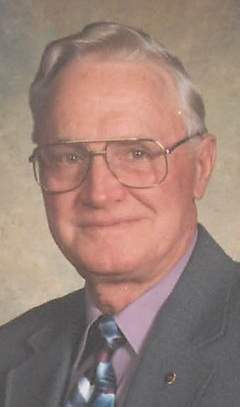 Dale Richard Erickson, 84, of Courtland, Kansas passed away Tuesday, March 18, 2014. He was born on July 15, 1929 to Andrew Edward and Esther Emelia (Anderson) Erickson. Dale attended country school and graduated from Courtland High School in 1947. He enjoyed playing football, basketball, and excelled in track under the guidance of Coach Raymond Stewart. After high school, he went into farming with his brother Norman. In 1952, he served in the U.S. Army, where he attained the rank of Cpl, spending most of his time at Camp Carson in Colorado Springs. After his honorable discharge, he returned to farming, and on September 5, 1954 was married to Eileen Appleby. They lived on the family farm northeast of Courtland. To this union four children were born, Julie Ann, Dale Randall, Edward Lee, and Susan Leann. In March 1985 he became the relief rural mail carrier for Courtland. In April 1989 he took over as the full-time carrier from Orwin Marquardt and strived to maintain the high standard of delivery shown by Orwin. Dale and Eileen moved into Courtland in March 2001 and Randy took over the farming. He retired from the mail route in October of 2002. Dale enjoyed following his children and grandchildren in their school activities, especially enjoying their sports. Dale and Eileen took many traveling group tours, the last one in 2006, a trip to Alaska. As his health declined, the trips became shorter, to Abilene and Salina to the community theatres. Dale was preceded in death by his parents; seven brothers, Carl, Hugo, Leonard and Norman Erickson, Eldon, Bryce and Roy Haney, his sisters Lorine Aspegren, Elva Greenwood Penn, and Dorothy Tucker; and daughter-in-law Edie Erickson. He will be greatly missed, but forever remembered by his wife Eileen of their home; children Julie (Curtis) Lindberg, Randy, Ed (Diane), and Susan; grandchildren, Jennifer Goodrich, Erica Siaji, Nathan Lindberg, Kyler and Logan Erickson, Amy Erickson, and Chris Bridwell; great grandchildren Cody and Lynly Bridwell, Hudson Lindberg and Zawadi Siaji; sister Mildred (Chester) Russell; many nieces and nephews; and many friends.

To order memorial trees or send flowers to the family in memory of Dale Erickson, please visit our flower store.