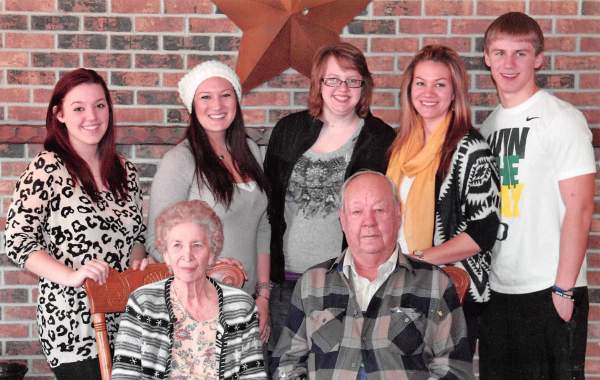 Dale Dean Vanous, son of Ed and Ottilie Brzon Vanous, was born on June 17, 1928, in Jefferson Township, Republic County, Kansas. He passed away on Monday, October 22, 2018, at Belleville Health Care Center, at the age of 90. He attended Jefferson Center Elementary School, and graduated from Belleville High School in 1945. Dale served in the United States Navy from March of 1946 to February 1948. He earned a Victory medal as a WW II veteran. Dale said he learned to swim and drink beer in the Navy, but never really got the swimming thing down.

Dale was united in marriage to Dorothy (Havel) Vanous on March 7, 1953, in Belleville, Kansas, and to this union three children were born: Duane, Darwin and Denise. Dale and Dorothy farmed all their married life of 63 years, but Dale was forced to retire at the age of 88 years, due to failing health. Dale and Dorothy enjoyed family, friends, and life throughout their marriage. They enjoyed going around the section, taking their daily “agricultural tours” each day. Dale loved farming, hunting and fishing, and his passion for nature was known by all. He especially loved spending time and making memories with his family at the pond north of the family home. The grandchildren and great grandchildren had a very special place in his heart. Due to failing health, Dale entered the Belleville Health Care Center in November 2017.

Visitation will be at Tibbetts-Fischer Funeral Home on Thursday, October 25, 2018 from 1:00 p.m. to 8:00 p.m., with family greeting friends from 6:00 p.m. to 8:00 p.m. Graveside funeral services will be held on Friday, October 26, 2018, at 1:00 p.m., at Pleasant Hill Cemetery, rural Belleville, Kansas. Military graveside honors will be conducted by the United States Navy, and the American Legion – William Fleming Post #345 of Cuba, Kansas. Memorials may be made to Meadowlark Hospice, and sent in care of the funeral home. Online condolences may be left at www.tibbettsfischerfuneralhome.com. Tibbetts-Fischer Funeral Home of Belleville assisted the Vanous family with these arrangements.

To order memorial trees or send flowers to the family in memory of Dale Vanous, please visit our flower store.