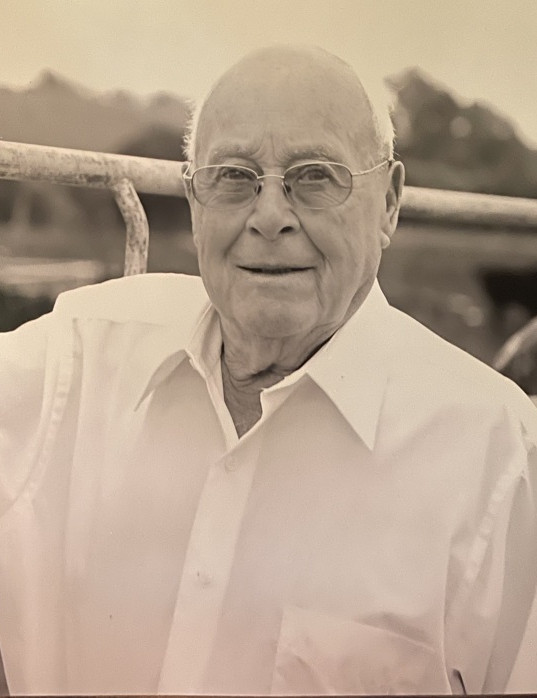 Our Dad, known as “Dean” or “Grandpa Dean, passed peacefully in his sleep at the Country Place Senior Living facility on August 7, 2022.   Dean was born to Bert Allen and Edna (Wilson) Allen on December 19, 1926 on the farm near Haddam, Ks.

Dean lived his whole life in or around Haddam.  He attended and graduated from Haddam High School in 1944.

He was in the Merchant Marines during WWII and traveled the world.

After his time in the Merchant Marines, Dean taught school at the Rock School in Coleman Township, Washington County Kansas.  He then went on to teach at the Clara School.  One of Deans sons even married a daughter of one of his students from Clara School.

Dean was drafted into the army during the Korean War and once again traveled the world. While overseas, Dean ran into two familiar faces from home, Don Skipton and Wayne Corbett.  They all lived within ¼ mile of one another.  Talk about a small world!

On January 11, 1953, Dean married Evelyn Gale Kennedy.  They were married at the United Methodist Church in Munden, Kansas and made their home south of Haddam where Dean had grown up and lived the majority of his life.  Together, Dean and Evelyn had four children.  Doug, Robert, (better known as Bob), Tammy, (the pretty one)!  And Jack….you would think that this one gave Dean his gray hair, but no….Dean had gray hair long before.

Dean farmed the ground his family had farmed and this grew into a love for gardening in later years.  After some time, Dean and Evelyn moved closer into Haddam, where he farmed and owned and operated the local locker plant.  He ran this until it burned.  That was when he became the proprietor of the Uptown Mart for several years.

In or around 1965, Dean started to carry mail on the rural route.  You could always see him driving the route, and as they say…..Neither rain, nor snow, nor sleet, nor hail shall keep the postmen from their appointed rounds.  He also had a penchant for a good cigar during these years, and you could see him chewing on a cigar stub. He ran his routes for 30 plus years until he retired.

Dean and Evelyn enjoyed going dancing, playing cards with friends, and spending time with family.  His passion for working the ground found him in the garden.  He would plant such a big garden; he could have opened a summer farmers market himself.  Dean liked going to auctions and always came home with his “great finds”.  His grandkids and great grandkids love seeing all the treasures that Grandpa Dean has. Dean enjoyed building and refinishing things.  His workshop was something to behold.  He had every and any tool needed for whatever the situation. It was like organized chaos, but he knew where everything was and everything had its place.   Another passion would have to be fishing.  He spent many summers at the ponds and traveling with his kids to fish in the streams of Colorado. He also loved to spend Father’s Day weekends camping with his kids and grandkids at Lovewell Lake.  He spent many nights on the front row of the bleachers watching his sons, daughter, and grandsons play football and basketball.  That was a lot of bleacher time, but he enjoyed every minute he was able to share his time with them.

Truly a good man with a good heart.

Graveside funeral services will be Wednesday, August 17th, 2022, at 1:00 pm, at the Haddam City Cemetery.

Visitation will be Tuesday, August 16th, from 9am – 8pm, with the family greeting friends from 6pm – 8pm, at Tibbetts-Fischer Funeral Home in Belleville.

Memorials are requested to the American Cancer Society, and may be sent in care of the funeral home.

Tibbetts-Fischer Funeral Home is assisting the Allen family with these arrangements, www.tibbettsfischerfuneralhome.com

To order memorial trees or send flowers to the family in memory of Dean Allen, please visit our flower store.