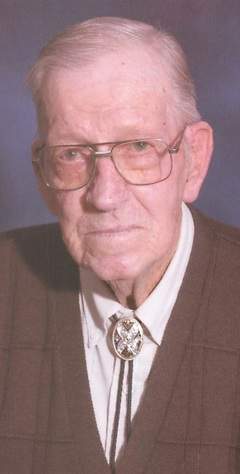 DELBERT'S WISHES WERE THAT THOSE IN ATTENDENCE WOULD DRESS CASUAL AND THAT ALL THE GUYS WOULD WEAR THEIR FAVORITE CAP!!!!!

Delbert Clarence Aspegren was born September 8, 1927 to Clarence H. and Lorine R. (Erickson) Aspegren on the family farm in Courtland. He was baptized and confirmed in the Courtland Methodist Church and later joined the Amana Lutheran Church of Scandia. Delbert went to be with the Lord on Saturday, July 11, 2015 after difficulties with congestive heart failure. He was 87 years of age. His strong faith helped him cope and not complain, but courageously endure through difficult times until God called him home.  Family was always his first priority. His wife, children, grandchildren, and great grandchildren meant the world to him. During Delbert's youth,  he learned the skill of carpentry and worked for a short time in Topeka as a carpenter. Upon returning to Courtland from his time in Topeka he used his carpentry skills to help in the construction of the Lovewell Dam. Delbert was a member of the Masonic Lodge of Courtland holding many offices. He was also a member of the Scandia Lions Club, serving in various leadership roles and a former school Board member of 12 years for the Scandia/Courtland Public School District USD 426. Delbert was instrumental in bringing rural water to Republic County and served on the board of development for Republic County Recreation Association bringing a golf course to Belleville with grass greens. Delbert owned and operated the Clarence L Gile Insurance Agency with his wife Norma for the past 33 years. Farming was in his blood.  He grew up helping his Dad and then took over the farming operation planting and raising the crops later passing on the farming responsibilities to his son, Ron. Delbert was united in marriage to Norma Greenslade on April 20, 1947 at First Methodist Church of Topeka and to this union four children were born: Phyllis, Ron, Jane Ann, and Carrie. Delbert was preceded in death by his parents, his sister Mable Davis and Son-in-law Jim Jensik. He will forever be remembered by his wife Norma of their home, children Phyllis Jensik and husband Stan Grueber, Belleville, Kansas, Ronald Aspegren and wife Connie, Courtland, Kansas, Jane Ann Carlgren and husband Ed, Scandia, Kansas, and Carrie Stehno and husband Mark, Nixa, Missouri; his grandchildren Wade Jensik and wife Angie, Belleville, Kansas, Quinn Rakaskas and husband Chris, Wichita, Kansas, Sarah Sadler and husband Tripper, Kansas City, Kansas, Ryan Carlgren and wife Lori, Courtland, Kansas, Lisa Manley and husband Colby, Eudora, Kansas, Bret Carlgren and wife Kate of Courtland, Kansas, Magdalen Stehno and Mitchell Stehno, Nixa, Missouri; his great grandchildren Claire and Emily Jensik, Jack and Ron Samuel Rakaskas, Brody, Drake and Sutton Sadler, Brayden, Cajsa, and Clayton Carlgren, Mia and Kole Manley, Brandt and Blakely Carlgren; his sister Helen Cook, Mesa, Arizona; many nieces and nephews; other relatives and friends. Visitation and viewing will be Thursday, 9am - 8pm at the funeral home. Funeral services will be 10:30am, Friday, July 17, 2015 at Amana Lutheran Church in Scandia with Pastor Tom Kamprath officiating. Masonic Rites will be conducted by Courtland Lodge No. 211 A.F. & A.M. Burial will be in the Scandia Lutheran Cemetery, rural Scandia. Memorials can be made to the Amana Lutheran Church, Courtland Methodist church or NCK Shrine Club C/O Swedish American State Bank of Courtland for children's medical/travel expenses. Tibbets-Fischer Funeral Home, Belleville, Kansas is handling these arrangements.

To order memorial trees or send flowers to the family in memory of Delbert Aspegren, please visit our flower store.