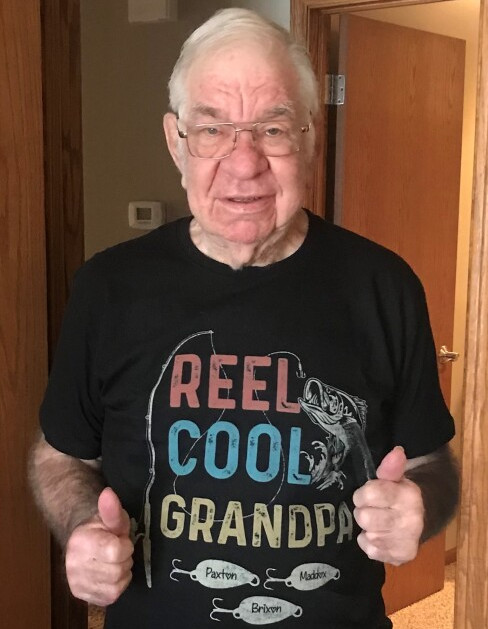 Donald Lee Minnig was born on November 21, 1938, in Ainsworth, Nebraska, the son of George and Neva (Zahl) Minnig. Don attended and graduated from Stuart Public High School, class of 1957. Following high school, Don attended Hastings College, where he obtained his teaching degree. Don was always proud of the fact that Tom Osborne was one of the players to come recruit Don to play football for Hastings College, and ultimately became one of Don’s teammates.

After graduating from Hastings College, Don signed a contract to teach math at Chester Public Schools. He taught math, business, and was the football and basketball coach, along with junior class sponsor. Don enjoyed helping the juniors decorate for prom, and helped them with many elaborate themes. Don spent his entire 38 year teaching career at Chester, before retiring.

During the summers, Don worked in construction and painting, where he formed life long bonds with the crews he worked with. Many of the young men Don worked with looked up to him as a mentor. He was a member of the Chester United Methodist Church, where he was involved in many different leadership positions.

Don was united in marriage to Glenda Rae Porter on August 13, 1966, at the Chester United Methodist Church, and to this union two daughters were born.

After he retired from teaching, Don enjoyed gardening, fishing and hunting. Don and Glenda were always on the go, and attended as many of their children, and later grandson’s events, as they could.

He is preceded in death by his wife Glenda, his parents George and Neva, and his sister, Mary Tonkin.

He will forever be remembered by his daughters, Janna Meyer (Shawn) and Leesa Minnig of Lincoln, grandsons Paxton Minnig (fiancé Brooklyn), Maddox Meyer and Brixon Meyer. Don is also survived by special family friend Chad Novotny, who was like a son to Don and Glenda.

Funeral Services will be Tuesday, August 9th, 2022, at 11:00 am, at the United Methodist Church in Chester. Burial will follow at the Chester City Cemetery.

Visitation will be Monday, August 8th, from 1pm – 8pm, with family greeting friends from 6pm – 8pm, at Tibbetts-Fischer Funeral Home in Belleville.

Memorials are requested to the church, or the Don Minnig Memorial, to be designated at a later date, and may be sent in care of the funeral home.

Tibbetts-Fischer Funeral Home is assisting the Minnig family with these arrangements, www. tibbettsfischerfuneralhome.com

To order memorial trees or send flowers to the family in memory of Donald Minnig, please visit our flower store.