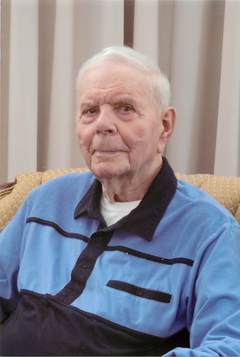 Family will be greeting friends 5pm to 7pm at the funeral home.

He attended grade school in Hubbell, Nebraska, then moving to Narka, where he graduated from Narka High School in 1948. Upon graduation, he enlisted in the U.S. Army. After basic training, he was stationed in Japan, then being sent to the Korean front lines. He spent 5 years in the military; 33 months as Korean POW. After discharge, he returned to Narka, KS., helping his dad in the garage.

He was united in marriage to Laura Chopp on March 12 th , 1955, at the American Lutheran Church in Belleville, Kansas. To this union, two children were born – Timothy and James. He spent 36 years working and managing Belleville Lumber Company, retiring in 1992.

He was a member of the Wesleyan Church – Belleville. He was a lifetime member of the VFW, American Legion, and Former POW Association. He was active in everything involving the American flag, which he loved so much, and fought for. He was involved in helping organize the Patriot Project and Veteran Day Parades. He loved helping other Veterans to receive the benefits they were entitled to, visiting rest homes playing his beloved Christian music, having bingo, etc. His pastime at home was making anything he could out of wood - especially wooden cars – until his painter (Laura) retired.

He is survived by his wife of Belleville, son Jim (Kim) of Sheridan, Wyoming; grandsons Joe (Ashley) of Gig Harbor, WA, Nick of Northwood, NH, Ryan (Stephanie) of Maumelle, AR; granddaughter Brenna Storey of Sheridan, WY; two great granddaughters, one great grandson; brother Bob of Albuquerque, NM, Delbert of Little Rock, AR, Ernie of Boulder, CO. He was preceded in death by his parents, son Timothy, mother and father-in-law Joe and Emma Chopp. sisters Margaret, Mildred and Lucille, brothers Milton, Vernon and Gary. And a host of friends and other relatives.

Funeral services will be held Saturday, June 9 th , at 10:00 am, at the Wesleyan Church – Belleville, with visitation on Friday, June 8 th , from 5pm to 7pm at Tibbetts-Fischer Funeral Home the family will be present. Burial will be at Belleville City Cemetery with Military Rites by Fort Riley Honor Guard. Memorials may be made to the Wesleyan Church, Patriot Project, Bethany Home, Republic Co. Hospital Physical Therapy Department, or the donor’s choice. Tibbetts-Fischer Funeral Home is entrusted with arrangements.

To order memorial trees or send flowers to the family in memory of Donald Slagle, please visit our flower store.