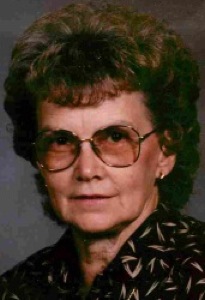 VISITATION:  Monday 9am to 9pm at the funeral home; family will greet friends 7 to 9pm.

MEMORIALS:  To the family's choice to be desginated later

Doris Mae (Hamm) Grummert-Tamerius of Belleville, Kansas formerly of Cuba was born February 15, 1928 at Thompson, Nebraska, the daughter of Amos and Mary Ann (Jacobs) Hamm. She entered into her eternal life Friday, April 12, 2013 while living at the Belleville Health Care Center at the age of 85 years. Doris attended grade school at Thompson and graduated from Fairbury High School with the Class of 1946. On April 11, 1948 she married Orland Grummert and they made their home near Plymouth, Nebraska. To this union, five children were born: Dave, Donald, Brad, Linda, and Diane. She married Cecil Tamerius on June 6, 1976 and moved to Cuba, Kansas. She had a love for anything outside. She planted a large vegetable garden, which she then shared the fruits of her labor with anyone who needed some. She also loved her flowers of any variety and fishing with any of the grandchildren anytime she could. Doris and Cecil spent many years making and selling wood clocks and plaques. They enjoyed traveling to different craft shows and meeting new people. She was very active in the Cuba Legion Auxiliary and helped many years at the Cuba-Rock-a-Thon cooking and doing whatever she could. Doris was preceded in death by her parents; brother Darwin Hamm; sister Darlene Smith; niece Joyce Smith; nephew Lowell Smith; baby Grummert; and stepson Rick Tamerius. She will be forever remembered by her husband Cecil, Belleville; sons, Dave and wife Susan Grummert, Donald and wife DeLaine Grummert, and Brad and wife Jeannette Grummert all of Plymouth, Nebraska; daughters Linda Trecek and husband Perry, Agenda, Kansas and Diane Freeman and husband Brian, Courtland, Kansas; stepdaughters Kay Hauschel and husband Gary, Fairbury, Nebraska and Joanna Novak and husband Rick, Haddam, Kansas; 18 grandchildren; 20 great grandchildren; brother-in-law Clarence Smith, Fairbury; many other relatives and friends.

To order memorial trees or send flowers to the family in memory of Doris Grummert-Tamerius, please visit our flower store.