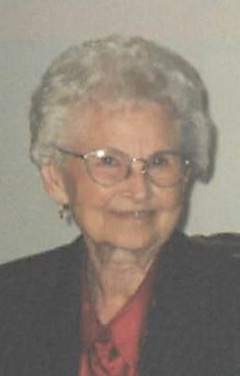 Family will greet family and friends 6:00pm to 8:00pm Friday at the funeral home.

Dorothy May Rhine, 91, passed away Wednesday, August 13, 2014 with her family by her side at the Belleville Healthcare Center in Belleville, Kansas. She was born May 15, 1923 at Hollis, Kansas to Harry and Martha (Stark) Ekstrom. Dorothy was the 8 th child of ten children. Dorothy married Marvin Rhine on February 17, 1942 at Concordia, Kansas. To this union a son John and a daughter Sheirl were born. Marvin and Dorothy made their home on a farm east of Cuba, Kansas for many years. Later they made their home in Washington, Kansas.  Upon Marvin’s death in 2003, Dorothy moved to Belleville to be near her two children. Marvin and Dorothy farmed and did custom harvesting for many years. She cooked part time at the Cuba Café and after moving to Washington, she cooked at the Swirley Top Steak House. Dorothy was an active member of the Haddam United Methodist Church and later transferred her membership to the United Methodist Church of Washington. She was very active in the ladies circle at the church and headed up the funeral dinners for many years. While living on the farm, Dorothy was a member of the Doing Dozen Unit at Haddam, Kansas and later the Emmons Unit at Washington. She enjoyed the county extension programs very much. She was an excellent cook, a master of pies, breads, and rolls. She was also a wonderful seamstress and enjoyed sewing for her family and friends. Dorothy loved her four grandsons, attending their activities and taking them camping. For several years Dorothy and Marvin went to Texas for the winter in their camper. Dorothy was preceded in death by her parents; four brothers; five sisters; and her husband Marvin.  She will be forever remembered by her son, John and wife Dorothy of Cuba, Kansas, daughter Sheirl and husband Richard Zenger of Belleville; grandsons Monty (Angie) Rhine, Heath (Lori) Rhine, Cory (Kristy) Zenger, and Todd (Ky) Zenger; ten great grandchildren; and three great, great grandchildren.

To order memorial trees or send flowers to the family in memory of Dorothy Rhine, please visit our flower store.