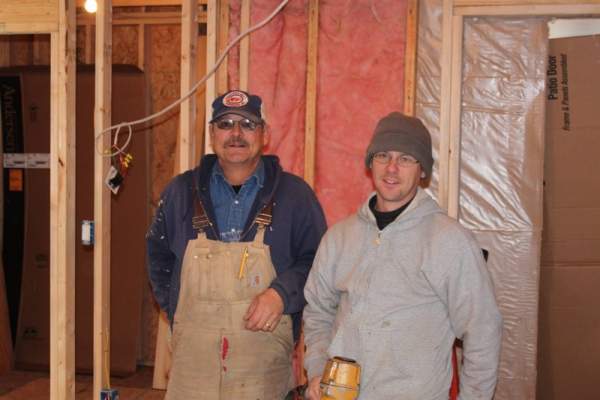 Douglas Duane Kramer, eldest son of Donald and Sandra (Lindsey) Kramer, was born September 22, 1956, in Fairbury, Nebraska, and died Friday, April 10, 2015, in Belleville, Kansas, at the age of 58. Doug attended school in Linn, KS, graduating in 1974.  He attended NCK Vocational Technical School in Beloit, Kansas, finishing the carpentry program in 1975.  He then joined his grandfather, Clarence "Jay" Gould, in carpentry in the Belleville area until Jay's retirement.  He was also mentored by Lumer Hynek and Dean Walker in his carpentry work.  Doug remained active as a carpenter until his death, working with his son, Ryan. On July 30, 1977, Doug was united in marriage to Dianne Wiemers at Greenleaf, Kansas.  To this union were born Jamie (Josh) Mast, Ryan (Misty Foutch), and Brett. Doug was preceded in death by his father, Don, parents in-law Harold and Shirley Wiemers, an infant sister, Cindy, and grandparents Chester and Dorothy Lindsey, Clarence and Lois Gould, and Ralph and Millie Kramer, aunts, uncles, and a cousin, Scott. Doug will be forever remembered by his wife of 37 years, Dianne, children Jamie and Josh Mast of Shawnee, Ryan Kramer and Misty Foutch of Belleville, and Brett Kramer of Junction City, his mother, Sandra of Washington, brothers Mike of Greenleaf, Tim and wife Dawn Kramer of Washington, Kansas, and Mary Beth Allen and husband Mose of Manhattan, Kansas.  Doug is also survived by grandchildren Henry and Thomas Mast, and Chasity, Caitlynn, Carlie and Cheyenne Foutch.  Doug will be missed by many other relatives and friends. During his life, Doug enjoyed track and basketball in high school.  He enjoyed farming, always wishing he could farm with his dad.  He valued young children, and was a good dad to his own children, coaching baseball, leading Cub Scouts, and attending their events.  He was in charge of feeding, changing, and bathing them as infants and toddlers due to Dianne working evenings. Doug enjoyed bowling, fishing, and shooting the breeze with his friends spending many hours at "The Shed" and at Cotton and Sandy's garage, as well as at Duffy's shop on many mornings and afternoons.  His favorite part of carpentry was finish work.  He was so very proud of the skills he had been given by Grandpa Jay.  Doug had a brief career in politics, serving on the Belleville City Council.  He was also passionate about his participation with the Belleville Fire Department. Doug would want us all to remember, “Don’t sweat the small sh…!”

Funeral services will be held 2:00pm Tuesday, April 14, 2015 at Tibbetts-Fischer Funeral Home, Belleville, Kansas. He will be laid to rest in Blocker (Hickory Grove) Cemetery east of Haddam, Kansas. Donations may be made in memory of Doug to the Belleville Fire Department. Tibbetts-Fischer Funeral Home, Belleville, Kansas assisted the Kramer family with these arrangements.

To order memorial trees or send flowers to the family in memory of Douglas Kramer, please visit our flower store.