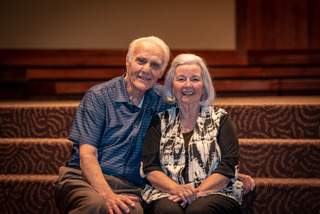 Born in Belleville, Kansas, on May 5, 1938, to Howard and Sylvia Donaldson, he was the youngest of four children:  Dorothy, Phyllis and Alfred.

During his junior year at Belleville High School, Don began dating the love of his life, Bernita.  After their wedding on June 1, 1958, the wonderful love story of their marriage went on to last for more than 63 years.

In 1960, Don graduated from Kansas Wesleyan with a Bachelor of Arts degree and moved to Derby, Kansas, where he began his career as a music teacher.  By the time they left the Wichita area six years later, Don had earned a Master’s degree in Music Education from Wichita State University and Bernita had given birth to their four children (Debra, Dena, Don and David).

In 1966, Don was thrilled to be chosen as the choral director for a new high school in Shawnee Mission, Kansas.  Because he made the most of his opportunity, he had many fond memories of his twelve years at Shawnee Mission South when he was done.  During that time, he also served as Music Minister at Hillcrest Covenant Church in Overland Park.  Finally, after earning a Doctor of Music Arts degree from the University of Missouri, Kansas City (UMKC), he moved his family to Salina, Kansas, where he taught for six years as the Professor of Music Education and Choral Studies at Kansas Wesleyan University.

From 1984 to 2000, Don finished his career as Professor of Music Education and Choral Studies at Asbury College (now Asbury University) in Wilmore, Kentucky.  In addition to teaching music education courses, giving voice lessons and directing choirs, he also served for a time as the Chairman of the Music Department.  After he retired, the college honored Don by awarding him the status of Professor Emeritus.

Over a period of four decades, Don impacted the lives of thousands of students not only through music as a conductor, but also through relationship as a mentor.  He influenced the faith and character of his students not just by directing what they sang, but by being who he was – a person who wanted them to become all that they could be.  As a conductor and as a professor he demanded the best from his students.  Sometimes that meant that students were highly encouraged to change their majors to music!

Don used his God-given talents to glorify his Heavenly Father.  He also touched the lives of many people by conducting incredibly gifted choirs that sang songs of praise and adoration throughout the United States and Europe. On one occasion, he even had the opportunity in 2001 to direct the Heartland Singers (a group of Shawnee Mission South Alumni) at Carnegie Hall in a performance of John Rutter’s Requiem just two months after the tragic events of 9/11.  In 2011, Don was awarded “Educator Laureate” by Distinguished Concerts International New York at Lincoln Center.  There have only been four recipients of this award since its creation.

Don had an indescribable love for his family, friends and students. He often shared how blessed and fortunate he was to have been surrounded by such amazing quality students and faculty throughout his gratifying career. His rapport, humor and connection with students was one of the signatures of his success.

Don was a loving husband and an extraordinary father.  He leaves behind a wife, Bernita, four children and their spouses: Debra Hanson (Ken), Dena Holgerson (Tim), Don Donaldson (Missy), and David Donaldson (Angie), 13 grandchildren and four great-grandchildren. He is survived by his sister Phyllis Donaldson.

Graveside Funeral Services in Kansas will be held on Saturday, July 3rd, 2021, at 10:00 am, at the Belleville City Cemetery, 1670 Nickel Road, Belleville, Kansas, with Pastor Timothy Holgerson officiating.

A “Donaldson Music Scholarship” at Shawnee Mission South is in the process of being established. More information to come; Memorials to this scholarship may be sent in care of Tibbetts-Fischer Funeral Home, PO Box 566, Belleville, Kansas 66935.

To order memorial trees or send flowers to the family in memory of Dr. Donald Donaldson, please visit our flower store.