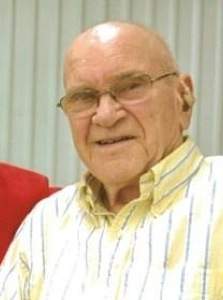 Eldon Ray Benyshek, was born on August 15, 1928, Concordia, KS to Steven and Olive Benyshek. He grew up in Cuba, Kansas a community where his father was a Banker, Insurance agent and later a Carpenter. He had two brothers, Robert and Steve. When Eldon was 3 � years old, scarlet fever robbed him of his hearing in both ears and he became deaf. He attended grade school and high school in Cuba, KS earning his scholarship to college. He displayed great talent as an artist during his school years and his desire was to be a commercial artist. With the help of hearing aids, Eldon enrolled at Bethany College, Lindsborg, KS, majoring in Painting/Commercial Art and graduated with a B.F.A. Degree. Shortly after his graduation, he was hired by The Boeing Company and became a Commercial Artist and later was a Lead in his group of 12 people. During his employment, he married and soon had four children: one son, David of Simi Valley, CA; daughters, Tamara Arnold of Andover, Tracy Kiser of Wichita, KS, and Denita Benyshek of North Bend, WA. Eldon retired from Boeing after 39 years of service and took up the hobbies of playing golf, camping, fishing, boating, traveling and model ship building. After eight years of enjoyment, he was diagnosed with tremors which began to limit his hobbies. He continued to enjoy his retirement life with grandsons; Jake, Cole, Michael and Jack Benyshek of Simi Valley, CA., and Hans Van Wyck of North Bend, WA., and his granddaughters; Lauren and Megan Kiser of Wichita. Eldon passed from this life Wednesday, April 3, 2013 in Wichita, Kansas at the age of 84 years. Visitation/Viewing will be Monday April 8th 2013 from 1-7 and family will receive friends from 5-7, funeral services will be 10:00am Tuesday all at Hillside Funeral Home East, 935 N. Hillside St., Wichita. A graveside inurnment service will be at noon on Wednesday, April 10, 2013 at the National Bohemian Cemetery, District 13 rural Cuba, KS. Memorial may be made to American Cancer Society care of the family. Tibbetts-Fischer Funeral Home, Belleville, Kansas is handling the local arrangements.

To order memorial trees or send flowers to the family in memory of Eldon Benyshek, please visit our flower store.