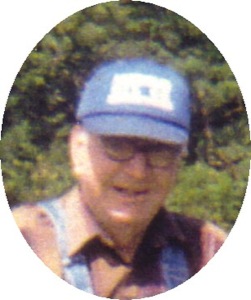 Elden L. Evert of Republic was born on September 5, 1924 to Elmer and Addie (Thompson) Evert and died on Wednesday, April 21, 2010 at the . He was 85. He graduated from in 1942 and was valedictorian of his class and was listed on the Lion's Club Honor Roll. He briefly attended college in before enlisting in the Army in 1943. He served overseas in from 1945 to 1947. After returning from active duty, he began farming in Republic. On August 29, 1949, he married Betty Florine Kopsa, who survives of the home. They lived all of their married life in Republic. Elden spent most of his time working on the farm and was very handy with tools. Elden was active in his community by serving on the city council, local school board and his American Legion Post #232. He often recited The Gettysburg Address for community events. His favorite hobby was gardening. He planted fields of potatoes, sweet corn, cantaloupe and pumpkins. Elden's pride and joy, however, was his watermelon. In later years, he enjoyed fishing with his brother, Cliff. He was preceded in death by his parents, Elmer and Addie and two sisters, June (Evert) Vance and Mary Lou (Evert) Delker. Elden is survived by four children: Vicki Hallagin and husband, Ron, Ellis, Kansas; Lorraine Evert and Carl Hoskins, Parsons, Kansas; Randy Evert and wife, Betsy; and Ron Evert and wife, Virginia, Belleville, Kansas. He is survived by 15 grandchildren and their families; , and Trevor Hallagin; Chris and ; Holle (Evert) Kniep; Heidi (Evert) Nordstrom; Shelby, Clayton, Krystal, and Lynsey Hergott; Andrew, Erin, Ethan, and Lacey Evert. He was "Grandpa-Great" to twenty-eight great-grandchildren. He is also survived by his brother, Cliff Evert and wife, Jetty, , and a sister, Darlene (Evert) Jensen, . Memorial services were held Saturday, April 24, 2010 at Tibbett-Fisher Funeral Home in . Inurnment was in , rural Republic. The family suggests memorials to the .

Tibbetts-Fischer Funeral Home, was in charge of these arrangements.

To order memorial trees or send flowers to the family in memory of Eldon Evert, please visit our flower store.