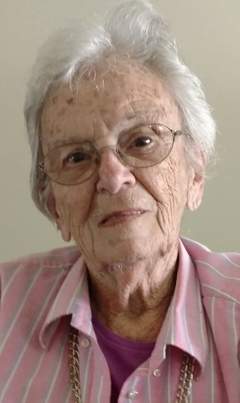 Ella Ethel West, daughter of Howard and Mildred (Fencl) Smith, was born July 18, 1922 at Haddam, Kansas. She passed from this life Saturday, August 13, 2016 in Belleville, Kansas at the age of 94 years. Ella went to country schools in her early years and graduated from Haddam high School with the Class of 1940. After receiving her Normal Training, she taught school at White Hall and Arlington country schools for five years. She also worked at Fencl’s grocery store for her uncle. Ella was united in marriage to Joseph West on January 9, 1953 and to this union two children, Kent and Karen were born. Together Ella and Joe owned and operated Haddam Truck Line for 30 years. She also worked as a Postal Clerk at the Haddam Post Office for 30 years. Ella was an active member of the Haddam Methodist church serving as Financial Secretary for many years and quilted with the guild. She was active in the community as well, serving as City Clerk for several years and helping with the election board and city library. Ella measured the local rainfall and reported to the Topeka Weather Bureau for 29 years. Ella and Joe traveled some and after his death, she continued traveling and eventually made it to most every state including Alaska. She enjoyed reading and playing cards. Ella was preceded in death by her parents; husband Joe; and brother Floyd Smith. She will be forever remembered by her children Karen Tolle and husband William, Galva, Kansas and Kent West and wife Cindy, Bartlesville, Oklahoma; grandchildren Jami (Darrel) Messner, Joe (Lera) West, Mindi (Matt) Parsell, Eric (Zofia Murczek) West, Kelly (Daniel McKinney) West; great grandchildren Justin Messner, Emily Ella West, Joseph Wayne Parsell, James Joseph West, and Noelle Marie Messner; sisters-in-law Margaret Smith and Ruby Harding; many numerous nieces, nephews, and cousins; and many friends. Funeral services were held on Wednesday, August 17, 2016 at 10:00am at the United Methodist Church in Haddam, KS. Burial was in the Haddam City Cemetery, Haddam, KS. Tibbetts-Fischer Funeral Home assisted the family with arrangements.

To order memorial trees or send flowers to the family in memory of Ella West, please visit our flower store.