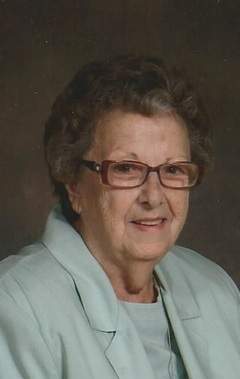 Ellen (Else Rosa) Homolac, daughter of Eugen and Wilhelmina (Jung) Stadler, passed from this life on Wednesday, August 27, 2014 as a resident of the Belleville Healthcare Center at the age of 86 years. She was born in Ziegelhausen, Germany on October 30, 1927 and immigrated to the United States as the bride of Charles Homolac after World War II. They were married on November 28, 1952 in Toronto, Canada. Ellen was preceded in death by her parents Eugen and Mina; and brothers Oscar and Robert. She will be forever remembered by her husband Charles of Belleville; sister Martha Hotz of Ziegelhausen, Germany; sisters-in-law Evelyn Flaska of Concordia, KS, Rita Stadler and Rosemarie Stadler of Peterstahl, Germany; four nieces, two nephews; other relatives and friends. Ellen was a member of the Catholic Altar Society, the women’s Auxiliaries of the V.F.W., Eagles, and American Legion. She devoted many hours to community service and was instrumental in providing free community Thanksgiving dinners at the American Legion for many years. Her Funeral Mass was celebrated by Father Brian Lager on Tuesday, September 2, 2014 at St. Edward Catholic Church in Belleville, Kansas. Burial was in St. George Cemetery rural Munden, Kansas. The Rosary was held Monday, September 1, 2014 at Tibbetts-Fischer Funeral Home, Belleville, Kansas. Memorials may be made to the American Legion Auxiliary of Cuba or St. Edward Catholic Church.

To order memorial trees or send flowers to the family in memory of Else Homolac, please visit our flower store.