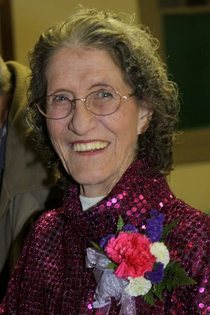 Elva Belle (Watson) Gleason, 83, left our presence to spend eternity with Jesus on January 10, 2014.  She was born in Lebanon, Kansas but lived most of her life in Belleville.  At age 17 she married George William Gleason and they had three children.  Elva worked as a nurses aide at several nursing homes and retired from the Belleville Health Care Center in 1993.

Over the years she opened her home to many and always had a cup of coffee for those who dropped by.  She had a passion for playing bingo and would play as often as she could.   Elva also had a love for crocheting and doing crafts.

She is preceded in death by her husband George and her son Delwin.

Surviving her are her two sisters Lola VanWey of Mankato, Kansas and Wanda Hodge of Forsyth Missouri, son J.L. of Park City, Kansas and daughter, Norabelle (Norie) Lyon and her husband Jay of Yukon, Oklahoma.  She had two granddaughters, Janelle Rodgers and Alicia Limke, both of Mustang, Oklahoma, their husbands respectively, Rob and Andy and their children, Alyssa, Bryce, Natalie, Rachel and Kristen.  Elva also had a large number of very close friends who called her "grandma" and whom she dearly loved.

Services will be held at the Tibbetts-Fischer Funeral Home in Belleville, KS on Tuesday, January 14th at 10:30 AM. Following the service, burial will be in Ida cemetery near Munden, KS. Memorials may be made to the Family.

Please click here to view the video tribute
To order memorial trees or send flowers to the family in memory of Elva Gleason, please visit our flower store.