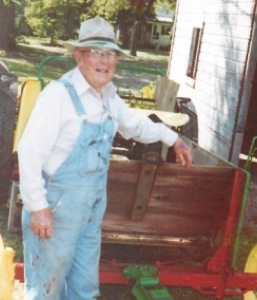 Eugene Harold Spitler, son of Jacob and Pearl (Pitsenbarger) was born March 16, 1917 at Courtland, Kansas. He passed from this life Friday, February 8, 2013, at Hilltop Lodge in Beloit, Kansas, at the age of 95 years. Gene was raised in the Courtland area with his brother Ray, attending Courtland High School and graduating with the Class of 1936. He was united in marriage to Leora Loring on January 18, 1939 at Courtland and to this union of 74 years a daughter Anita was born. Gene and Leora farmed near Courtland until they moved into town in 1958. Gene went to work for the Kansas Bostwick Irrigation District working nearly 20 years as a "ditch rider." He was a faithful member of the United Methodist Church of Courtland, serving on the board in his earlier years and also on the school and Farmers Union boards. He was a 68 year member of the Masonic Lodge, first in Formoso and then Courtland.  He loved tinkering with old cars and driving them in area parades. A special hobby of his was painting and restoring antique machinery which is now being displayed in Belleville at the Republic County Museum. Also, after retiring, he enjoyed travelling with Leora to many of the United States on bus trips and personal trips with family. Gene was preceded in death by his parents and brother, Ray. He will be forever remembered by his wife Leora of Beloit, Kansas; daughter and son-in-law Anita and Bill Walsh also of Beloit; step grandchildren Mary Landen, Michael Walsh, and Kathy Aagesen; great grandchildren Trevin Aagesen, Danielle and Justin Landen, Colby and Karissa Walsh; nephews Ron and Howard Spitler; other relatives and a host of friends. Funeral services were held Tuesday, February 12, 2013 with Pastor Kathy Aeillo officiating. Masonic Rites were conducted by Courtland Lodge No. 211 A.F. & A.M. Burial was in the Courtland Cemetery. Memorials may be made to the Courtland Methodist Church, Solomon Valley Hospice, and Shriner's Children's Hospital. Visitation will be held Monday 9am to 8pm at Tibbetts-Fischer Funeral Home, Belleville, Kansas.

To order memorial trees or send flowers to the family in memory of Eugene Spitler, please visit our flower store.