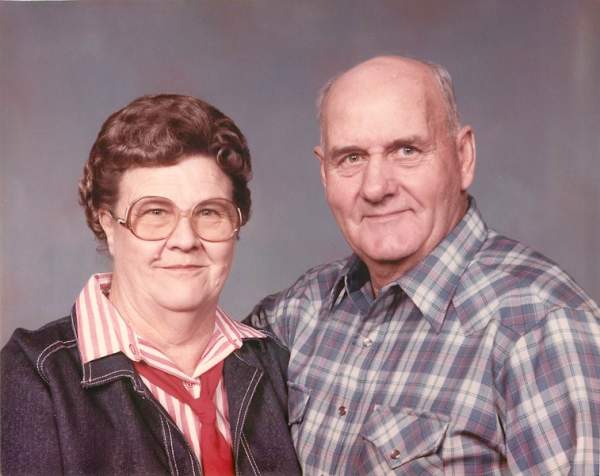 Eunice Beverly (Aspegren) Blackburn, youngest daughter of Oscar and Alma (Wallin) Aspegren was born November 26, 1923 on the Downing farm 2 miles north and 1 ½ miles east of Courtland, Kansas. They moved to White Rock when she was 5 or 6 years old and went to country school through the 7 th grade. At that time they moved to Grandpa Aspegren’s place on 36 highway and she went to 8 th grade at Courtland. Eunice graduated from Courtland High School with the Class of 1941. She worked in Oliver Johnson’s grocery store until she was married on October 18, 1942 to Robert Paul Blackburn. To this union three girls were born: Pamela, Patricia, Carla. She was baptized at the home of her grandparents P. J. Aspegren, where Mark Russell lives now and confirmed in 1939 in the Methodist Church in Scandia. She transferred her membership to the Courtland Methodist Church in 1946. Eunice passed from this life Saturday, December 12, 2015 at the Long Term Care facility in Belleville, Kansas just a few days past her 92 nd birthday. She was preceded in death by her parents; husband Bob in 1991; sons-in-law John Langston and Jack Shumard; brother Carl Aspegren; and sisters Gladys Johnson and Donelda Bowen. Eunice will be forever remembered by her daughters Pamela Shumard, Patricia Blackburn and Carla Langston all of Courtland; grandsons Shane (Hannah) Langston and Seth Langston; granddaughters Nicole (Ryan) Kraus and Tamara (Mitch) Wiezorek; her great grandchildren Kinzey, Tatum, Khloe, Katelyn, Jack, Keegan, Warren Robert (Ren), Kaylee, and Lexi; several nieces and nephews; other relatives and friends.

Funeral services will be 10:30am Tuesday, December 15, 2015 at the United Methodist Church, Courtland, Kansas with Pastors Kathy Aeillo and Richard Cox officiating. Burial will be in the Courtland Cemetery. Memorials in Eunice’s honor may be made to the Pike Valley Foundation. Tibbetts-Fischer Funeral Home, Belleville, Kansas assisted the Blackburn family with these arrangements.

To order memorial trees or send flowers to the family in memory of Eunice Blackburn, please visit our flower store.