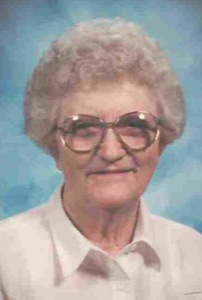 Georgia Kenyon, long time educator, died on Tuesday, October 18 at Republic County Hospital in Belleville. Kenyon was born Georgia May Griffith on May 15, 1926 in WaKeeney, Kansas, where she graduated from Trego County High School. After having a family of four children, Kenyon found her life's passion in education, and spent most of her life as both a student and a teacher. She completed three college degrees in Education and Reading as well as specialized programs for Learning Disabilities and Library Science. In 1971, Georgia moved to Belleville where she taught Junior High Reading. Later she took over as librarian in the elementary schools, where she remained until retiring in 1994. After retirement from the schools, she took on the position of Director and Curator of the Republic County Museum until 1997. A longtime member of the First United Presbyterian Church, she was well aware of the shortage of pastors in the area churches and studied to become a Lay Pastor, serving several northern Kansas congregations over the next decade. In addition, she was employed part-time by Tibbetts-Fischer Funeral Home. Contributing to her community was always a priority to Georgia. During the mid 1970's, she worked with the Belleville Public Library on a series of oral history interviews to capture the memories of older citizens in order to help record the history of the area. In the process, she saw there were unmet needs among many of the senior population. Georgia took a leading role in the development and conversion of Belleville's old Wesleyan Church into a home for the Golden Bell Haven, ensuring that the seniors in the community would have needs met in both nutrition and social interaction. Georgia is survived by her children, Rebecca van Lier and husband Robert of Indianapolis, Indiana; Jason Kenyon and wife Bonnie of Yoder, Colorado; Mary Young and husband Ron of Arkansas City; and Scott Kenyon of Houston, Texas; grandchildren Charles O'Neill and wife Deborah of Denver, Colorado; Amanda Young of Kansas City and Griffith Young of Emporia; nieces Janeice Keady Crosson, Gail Keady and Christie Jones. She was preceded in death by her parents, Jason Griffith and Francis Smee Griffith; sister Thelma Keady and brother-in-law William Keady, brother Herbert Griffith and sister-in-law Ruth Griffith Horak, and nephew Gene Keady. Funeral services were held Friday, October 21, 2011 at Tibbetts-Fischer Funeral Home. Burial was in the WaKeeney City Cemetery in WaKeeney, Kansas. Memorials may be made to the Republic County Museum. Tibbetts-Fischer Funeral Home, Belleville, Kansas was entrusted with these arrangements.

To order memorial trees or send flowers to the family in memory of Georgia Kenyon, please visit our flower store.