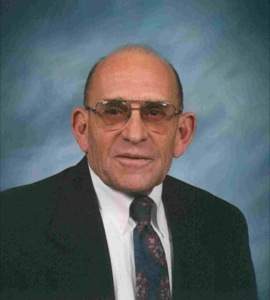 Gerald Dean Blazek, of Belleville, passed away on March 9, 2013. Gerald was born on Nov. 6, 1937 on a farm west of Cuba, KS. to Frank and Victoria (Shimek) Blazek. He was united in marriage to Illene Rizek on June 3, 1958 at St. Edward Catholic Church in Belleville, KS. To this union 5 children were born, twins, Kim and Kirk, Jan, Larry and Sue. He was a member of St. George Catholic Church for the past 44 yrs. Munden, KS.

Gerald was a 1955 graduate Belleville High school and a 1959 graduate of Kansas State University, where he was a member of the Farm House Fraternity. He worked for the Soil Conservation Service in Mankato, Stockton and Beloit, KS. Gerald served in the Army National Guard from 1959-1962.

Gerald and Illene bought her parents farm south and east of Munden, KS in 1968. They worked together to build a successful farrow to finish hog operation along with raising cattle and crops. They also sold meat from their hogs and cattle at the Gerald Blazek Meat Market located on their farm.

In 1989 Gerald joined the Munden State Bank as an Agricultural Loan Officer. Gerald later moved to Peoples Exchange Bank in Belleville and served as Senior Vice President and was in charge of Agricultural Loans. Gerald spent many hours helping his clients-friends reach their financial goals. He was on the board of directors for the Rolling Hills Electric Cooperative, Belleville Main Street, Rotary and Jaycee (Beloit), County Key Banker, RCDC Development Board of Directors, Belleville American Legion, Kansas Bankers Association. Gerald and Illene received the Soil Conservation Award for Republic Co.in 1976 & 1982. In 1993 they retired from farming and moved to Belleville, KS.

Visitation will be at Tibbetts-Fischer Funeral Home, Tues. Mar. 12 th at 6:30 pm to 8 pm, with the Rosary at 7pm. A Mass of Christian burial will be held Wed. Mar. 13 th at 10 am at St. Edward Catholic Church, Belleville, KS with burial following at St. George Cemetery, Munden, KS.

To order memorial trees or send flowers to the family in memory of Gerald Blazek, please visit our flower store.