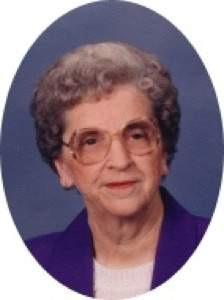 Gladys Evelyn Thomas Freed was born August 30, 1917 on a farm near . She was one of seven children born to Edward Thomas and Mayme Crawford Thomas.  Gladys grew up in the Kackley area, graduating high school from .  She was united in marriage to Leonard C. Freed on June 1, 1939.  To this union four children were born.  Gladys & Leonard lived in the Scandia and area for nearly 20 years, before moving into .  Gladys was a cook at the East Elementary for 13 years.  She was the site manager for the Golden Bell Haven for a number of years.  Gladys was a member of the and Eagles Lodge of Belleville and the Order of the Moose of Concordia.  She loved to play bingo!  She also loved to go to Auctions (mostly because it was a social outing).  Her most favorite thing to do was dancing!  She and Leonard rarely missed a dance.  She taught her kids to dance in the kitchen.  She used to say she would dance every night of the week if she could!  She was a loving wife, mother and grandmother.  Gladys was a "groupie" when it came to attending her son Steven's band when they were playing in the area.  She had a big heart and no one was left out.  Gladys passed away Saturday, March 12, 2011 at the in at the age of 93 years, 6 months and 13 days.  Gladys was preceded in death by her parents;  her husband Leonard 1991, her son Rex 1980, 5 sisters, 1 brother and 1 great grandson.  She is survived by her daughter, Sharon Kirk and husband Glen of Scandia, her sons, Steven Freed and wife Judy of Belleville and Danny Freed and wife Kathy of Hutchinson, 6 grandchildren, Shannon McCollum and wife Laurie, Topeka, Tim Freed, Wichita, Scott Freed and wife Marci, Fredonia, Lisa, Newton, Allison and Kerry Truitt, Hutchinson and Cory Freed, Hutchinson, 8 step-grandchildren, Lynn Kirk, Topeka, Kim Kirk, Scandia, Lisa Powers and husband Chris, Leavenworth, Brett Kirk, Scandia, Tiffiny Leon and husband Erik, Topeka, Eli Sallman and wife Jill, Chapman, Matthew Sallman and wife Jaime, Overland Park, Trenton Colburn, 4 great grandchildren, Shane McCollum, Topeka, Bryson Freed, Newton, Draken and Riley Truitt, Hutchinson, 12 step-great grandchildren, Kyle Powers and  Kysa Powers, Manhattan, Brady Billings, Topeka, Scott Kirk and Shawna Kirk, Scandia, Bryson and Jillian Leon, Topeka, Tyler Shultz and Trey Shultz, Chapman, Ella Sallman, Overland Park, Raven and Jesse Freed, Fredonia, many relatives and friends.  Funeral services were held Tuesday, March 15, 2011 at the in with Reverend Lenny Maxwell officiating.  Burial was in the . Memorials may be made to Golden Bell Haven, the or Long Term Care. Tibbetts-Fischer Funeral Home, was in charge of these arrangements.

To order memorial trees or send flowers to the family in memory of Gladys Freed, please visit our flower store.