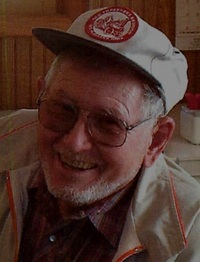 Glenwood Leroy Lundberg, 83, Courtland, Kansas passed from this life on Wednesday, October 30, 2013 at Mitchell County Health Center.  Glenwood, the youngest son of Fred Victor and Emmaline (Street) Lundberg was born June 11, 1930 near Courtland, Kansas.  Glenwood grew up in the Courtland community and attended Center District #96 school near his home and attended one year at Courtland Elementary School. He was drafted into the U.S. Army on July 29, 1952. He entered basic training at Ft. Leonardwood, MO on August 5, 1952. In October 1952 Glenwood was sent to Ft. Belvoir, Virginia for Engineer Maintenance training. Following his stateside training, Glenwood traveled to Korea with the Co. B 65 th Engr. Combat Bat. of the 25 th Division. While serving during the Korean War from February 1953 to March 1954, he operated a bulldozer for various operations. Glenwood received his honorable discharge on June 12, 1954. Once out of the service he went to Wichita to attend technical school where he studied radio and electronics.  Then he worked for Wilbur Toll and drove a bulldozer for him.   He farmed the Family Farm south of Courtland with his brother Gerald for many years.  Glenwood enjoyed flowers, gardening, fishing, camping, photography, traveling, genealogy and other research.  He was very proud of his military service and research and was the historian for the Courtland Cemetery District #25 and kept the directory records.  He was a director at the Republic County Historical Museum, where he spent numerous hours helping and researching.  Glenwood took several trips to Sweden to visit distant family members. He enjoyed corresponding with relatives in Sweden for years. He attended the Covenant Church of Courtland.  Glenwood will be greatly missed by all of his family and friends.  He was preceded in death by his parents, Emmaline (1942), Fred (1983), and brothers Richard (Feb. 4, 2009), Gerald (May 18, 2009).  He will be forever remembered by his sister Audrey Carpenter, Lincoln, Nebraska;  his cousin Charles Nelson and wife Pauline, Derby, Kansas;  his niece Vicky Teetor and husband Mike, York, Nebraska; his nephew Robin Carpenter, Riverside, California; his niece Emily Breeden and husband Steven, Belleville, Kansas; his niece Michelle Rifford and husband George, Gardner, Kansas; two great nephews and two great nieces; sister-in-law Alene Lundberg, Courtland; other relatives and a community of friends.  Funeral services were held Monday, November  4, 2013 at the Covenant Church, Courtland, Kansas with pastor Charles L. Peters officiating.  Burial was in the Courtland Cemetery.  Military rites conducted by the Ft. Riley Honor Guard, Fort Riley, Kansas. Memorials may be made to the Republic County Historical Society or the Covenant Church in Courtland, Kansas.  Tibbetts-Fischer funeral Home, Belleville, Kansas, was in charge of these arrangements.

To order memorial trees or send flowers to the family in memory of Glenwood Lundberg, please visit our flower store.