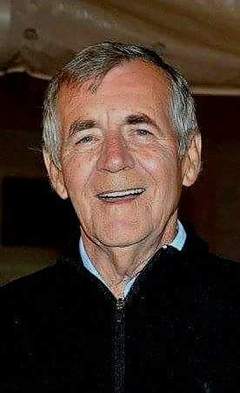 Harold Armand “Monty” Monsanto peacefully passed away on Saturday, May 26th, 2018 at the age of 75 while surrounded by family.

Harold is survived by his wife Carol of Belleville, KS; son Gary of Salina, KS; daughters Cheryl (David) Rutz of Salina, KS; Sarah (Ben) Noble of Topeka, KS; Laura (Justin) Thomas of Olathe, KS; six grandchildren; and many other family and friends.  He is preceded in death by his parents Ben and Jean Elkins; sister Jeanie Wrabel; and infant daughter, Charlene Monsanto.

Harold was born on April 15th, 1943 in Bridgeport, Connecticut.  He graduated from Newtown High School in 1961 and joined the Air Force.  He was stationed at Schilling Air Force Base in Salina, KS. He married Carol Blecha on August 20th, 1983.

Harold was a man of many trades.  He primarily worked as a house painter, but also did plumbing, carpentry, furniture sales, and many other professions. Harold loved music, as he ran sound systems for various occasions, enjoyed singing and playing guitar, and had several bands over the years.  He served as Entertainment Center Coordinator for NCK Free Fair for 27 years. While performing music brought Harold great joy, watching his children and grandchildren perform made him extremely proud.

A funeral to celebrate Harold’s life is scheduled for10:30am,  Friday, June 1st at United Methodist Church in Belleville, Kansas, with a graveside service and inurnment to follow at National Cemetery in Narka, Kansas.  Harold’s family will be greeting family and friends on Thursday, May 31 st from 6:00pm to 8:00pm at Tibbetts-Fischer Funeral Home, Belleville, Kansas. Memorials may be made to the family to be designated later.

To order memorial trees or send flowers to the family in memory of Harold Monsanto, please visit our flower store.