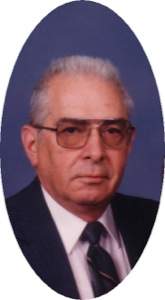 Harold Eugene "Dean" Smith, son of Clark Allen and Cora (Ryman) Smith, was born on October 31, 1929 at , . He parted this life on Tuesday, May 24, 2011 at the in at the age of 81 years. Harold attended Agenda rural high school and graduated May 15, 1947. He served his country in the United States Army. Harold was united in marriage to Norma Joan Johnson on June 19, 1953 in Agenda, and they spent 52 years as loving partners. He was a very hard worker and worked for the schools and Post Office for many years. After retirement, he enjoyed going to coffee with the men, reading, and collecting coins. Harold will be forever remembered by his children, Russell Smith and wife Jamie of Caldwell, TX, Allen Smith of Frederick, MD, Rebekah Smith of Salina, KS, and Tammy Cerroni and husband Patrick of Oshkosh, WI; seven great grandchildren, Kevin, Brad, and Tyler Smith, Eric Lang, Kali and Kyle Cerroni, and Amanda Schiratti; two great grandchildren Landon and Liam Smith; his brother Hubert Smith and wife Ellen of Derby, KS; other relatives and a community of friends. He was preceded in death by his parents; wife Norma in 2005; two sisters and a brother. Funeral services were held Monday, May 30, 2011 at Tibbetts-Fischer Funeral Home, , with inurnment in the . Military rites were conducted by the Honor Guard of Fort Riley. Memorials may be made to the Golden Bell Haven.

To order memorial trees or send flowers to the family in memory of Harold Smith, please visit our flower store.