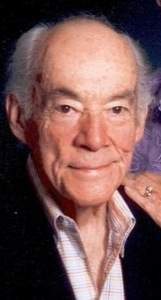 Henry Joseph "Joe" Adams III, was born on March 21, 1927, in Pratt, KS, to Henry Joseph II and Cleda Mae (Pace) Adams. He passed away on Thursday, June 14 th , at the age of 85. Joe attended school in Belleville graduating with the Class of 1945. He served in the US Navy during World War II. He graduated from Kansas State University and was a devoted alumni member his entire life. He worked for ABC (American Broadcasting Company) in New York, during which time he was involved in such projects as a Unit Manager for the Olympics, Wide World of Sports, Live Aid and many others. He was significantly involved in broadcasting for numerous space shuttle missions including Mesa, CA and NASA Houston. He had a great love for the small town atmosphere and southern hospitality that Fredericksburg had to offer. He was very well known in the community and had many cherished friendships. He was preceded in death by his parents, two wives, Norma and Louise, and a son, Mark Sinclair. Joe is survived by his wife, Joan Husum Adams of Fredericksburg; 3 daughters: Mary Hill and husband Stetson of Park Ridge, NJ; Martha Holswade and husband, Robert of Dumont, NJ; Harriet Adams and finance', Robert Wiseman of Brick, NJ; two sisters: Martha (Adams) Toburen and husband, Michael; and Kay Hoefer; brother, Allen Fryer; 6 grandchildren; 5 step-children; and many nieces and nephews. Funeral services for Joe Adams were held Monday, June 18, 2012 in St. Mary's Catholic Church, with Deacon Patrick Klein officiating. Graveside commital services will take place at 2:00pm Saturday, June 30, 2012 at the Belleville City Cemetery with his nephew Rev. Michael Adams Toburen officiating. Tibbetts-Fischer Funeral Home has been entrusted with these arrangements.

To order memorial trees or send flowers to the family in memory of Henry III, please visit our flower store.