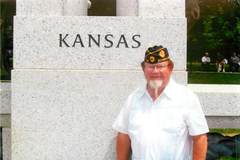 Wednesday and Thursday 9am to 8pm Visitation; Family will greet friends 7pm to 8pm at the funeral home.  Per Herb's wishes the casket will remain closed.

Herbert E. Johnson, 91, Courtland, Kansas passed from this life Monday, May 19, 2014 at the Republic County Hospital in Belleville, Kansas. Herb was born January 22, 1923 at the Johnson farm 5 miles south and one west of Courtland, Kansas, the son of Rudolph E. Johnson and Minnie (Freeman) Johnson. He attended Bollen School District No. 100 for two years, and moved with his family one and ¼ miles west of Courtland, where he graduated from Courtland High School in 1940. He attended Huff Business College in Kansas City, Missouri and was later employed by the Corps of Engineers, Kansas City, until going into the Army in January 1943. His Army travels took him to Ft. Leavenworth, Kansas, Camp Pendleton, Virginia, Ft. Jackson, South Carolina, Ft. Bragg, North Carolina, and Manila in the Philippine Islands. Herb married Dorothy P. Green, May 11, 1945 at the Main Post Chapel at Ft. Bragg. After being discharged in 1946 at Ft. Logan, Colorado, he again joined the Corps of Engineers in Kansas City until July 1947, when he took employment with Swedish American State Bank in Courtland, retiring in July 2001 after 54 years of service with the bank. Herb worked in all aspects of the bank during his career, ending as bank President and Board Chairman. He spent his lifetime working and giving back to the Courtland Community including serving on the school board, church and other community organizations. Herb was a member of Courtland Lodge No. 211 A.F. & A.M., Scottish Rite, Knights Templar, Isis Shrine Temple, and Royal Order of Jesters. He will be forever remembered by his sons Michael E. Johnson, Courtland and Dr. Gregory K. Johnson and wife MaryAnn of Parkville, MO; three grandchildren, Travis Johnson and wife Katrina, Wichita, Tanner Johnson and wife Kathy and children Ella & Samuel Herbert, Courtland, and Tara Renze and husband Scott and their children Benjamin & Jack, Olathe; step-granddaughters Erin Schaffer and husband Brett and children Kasey & Kinzer, Spearville and Jamie Blacklock and husband Curt and children Colt & Waylon, Saskatoon, Saskatchewan; other relatives and friends. Herb was preceded in death by his parents; wife Dorothy in 2009; daughter-in-law Maggie Johnson; and brother Ernest R. Johnson.

To order memorial trees or send flowers to the family in memory of Herbert Johnson, please visit our flower store.