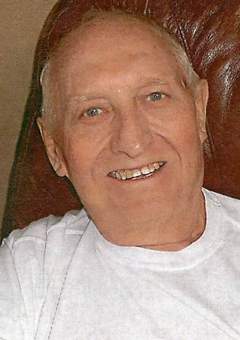 Jack D. Morgan, 79, Belleville, KS son of Fred “Pete” & Gladys Dodge-Morgan born June 30, 1936 passed away Saturday, March 5 th , 2016 at Republic County Hospital surrounded by his family. Jack was united in marriage to Francy Haberling-Morgan June 16, 1958 and to this marriage one child was born, Kim Morgan-Palecek. In Jack’s early career he traveled cross country working on the pipeline where he met Francy in South Dakota. Jack continued his work for Joy’s Insulation in South Dakota and later Spangler Insulation in Belleville. From there Jack worked on the Rock Island Railroad in Belleville as a switchman and later the Kyle Railroad. He continued his railroad career by moving to Huron, South Dakota and working on the Dakota Minnesota Eastern Railroad as an engineer where he retired in 1999. Jack was an avid 8-Ball pool player. Widely recognized not only for his pool skills but his personality. Even being recognized in the South Dakota 8-Ball Hall of Fame. Jack never knew a stranger no matter what state he was in there was always someone he knew. Jack will be greatly missed by his other pool sharks and in Heaven, Jack will never scratch on the 8 ball again. Jack was preceded in death by his parents and sisters Arletha Taylor, Fredda Awalt-Lash and brother Jerry Morgan. He is survived by his wife Francy, of the home, and Kim (Cody) Palecek of Munden and 7 grandchildren: Tatum (Brad) Couture, Domonik (Clark) Siemsen, & Gretta (Jeremy) Snapp, all of Belleville, MollyElizabeth (Chris) Sederlin, Junction City, Little Cody (Megan) Palecek, Duke & Dalton Palecek, of Munden. Jack was then blessed with 11 Great-Grandchildren, Gunnar & Gannon Couture, Maddix & Zelma Siemsen, Frankie & Farmer Snapp, Gabbi, Addi, & Maddie Sederlin and Cody Hank & Harper Palecek. Jack is also survived by 3 sisters, Bert Sasser, Cheryl Eickmann & (Alice) Amanda Honeycut as well as lifelong friend Francis (Marsha) Esslinger and also many other dear relatives & countless friends. The family has chosen to donate his body to medical research in hopes to helping further education in Alzheimer’s. A private family inurnment will be held at a later date. Memorials may be made to Republic Country Hospital Long Term Care.

To order memorial trees or send flowers to the family in memory of Jack Morgan, please visit our flower store.