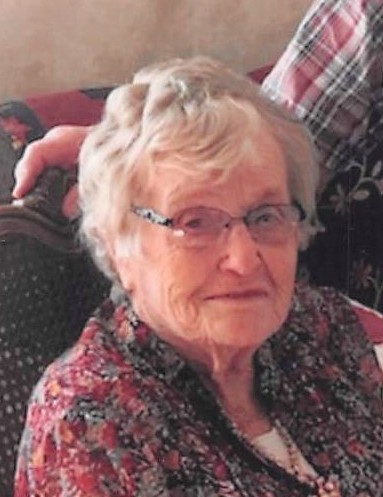 Jacqueline “Jackie” Janet (Lilly) Reed, 87, passed from this life on March 29, 2022 in the comfort of her home.  She was born November 8, 1934 in Belleville, Kansas, the daughter of Jack & Agnes (Jensen) Lilly.  She moved to California in 1942 where she was educated and lived throughout her childhood.  Jackie graduated from Leuzinger High School, Hawthorne, California in 1952.  She married Reginald “Reggie” O. Reed in Quartzsite, Arizona on November 7, 1953 and returned to Kansas.

Jackie, Reggie and family farmed in Republic County Kansas their entire married life.  While being an active farm wife, Jackie was also employed off the farm over the years at the Republic Co. FSA, Clarence Gile Insurance Agency, and managing agent of the Johnson Insurance Agency for over 35 years. While at the Johnson Insurance Agency and Swedish American State Bank, Jackie was especially fond of her coworkers and customers and was known to take time to read children a book or two while their parents conducted business in the bank.  It was also common to see those young customers’ “artwork” posted on the walls in her office.  Jackie was a true people person with a sharp wit and generous character.  The grandmother of nine, anything was “ok” at Grandma’s house.  Her great grandchildren were fortunate to have her as an active part of their young lives as well.  Grandma and Grandad always had time for grandchildren and great grandchildren.

Friends may sign Jackie’s register book at Tibbetts-Fischer Funeral Home in Belleville on Friday, April 1st, 2022, from 9am – 5pm.

Private family inurnment will be held at the Courtland Cemetery with Pastor Sandra Jellison-Knock officiating.

Memorials may be made to the Courtland Community Library, Solomon Valley Hospice, Courtland Swimming Pool and Park fund or of the family’s choice, and may be sent in care of the funeral home.

Tibbetts-Fischer Funeral Home is assisting the Reed family with these arrangements, www.tibbettsfischerfuneralhome.com

To order memorial trees or send flowers to the family in memory of Jacqueline "Jackie" Reed, please visit our flower store.