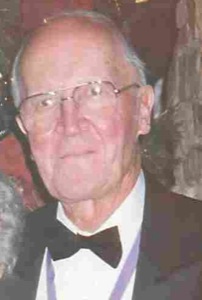 James A. Tibbetts, 92, of Belleville, Kansas died Tuesday, March 19, 2013. He was born January 28, 1921 in Russell, Kansas, the son of Dr. James E. and Doris (Schulz) Tibbetts. Jim graduated from Marion High School in 1938, attended Kansas University and graduated from Kansas City Mortuary School in 1941. He was a Veteran of WWII and served proudly in the United States Army Air Corps from 1942 thru 1945. Jim and wife Lib were college sweethearts, Jim attending KU and Lib attending Emporia State Teachers College. Jim and Lib were married September 19, 1942 in Marion, Kansas and celebrated 70 years of marriage in September. After the war, they moved to Marysville, Kansas and in 1947 they moved to Belleville. Jim and his brother Dean owned Tibbetts Bros. Furniture Store and Funeral Home in Belleville and various funeral homes throughout Kansas and Nebraska. He was preceded in death by his parents and brother Dean. He will be forever remembered by his wife Elizabeth (Lib), daughter Paula (Douglas) Simms, Belleville; son J.C. (Bev) Tibbetts, Lansing; grandchildren Christine (Michael) Conn, Snoqualimie, WA, James K. (Anne) Simms, Daykin, NE, Julia (Jeffrey) Werthmann, Easton, KS, and Jill (Brian) Luse, Omaha, NE; seven great grandchildren: Spencer and Libby Conn, Tucker and Riley Simms, Maddy Werthmann, and Abby and J.J. Luse; sister Mary (Herb) Glidden, McPherson; sister-in-law Joan Tibbetts-Baker, Belleville; several nieces and nephews. Jim was active in the community during his many years in Belleville. He was a member of the United Presbyterian Church, served as Elder and member of the Board of Trustees, served as President of the Lions Club, President of the Kansas State Board of Mortuary Arts and Funeral Directors Association, a member of the Belleville Chamber of Commerce, Masonic Lodge, York Rite, Scottish Rite, and Isis Shrine Temple and Jesters in Salina, V.F.W., American Legion, Belleville Country Club, and served on the Belleville School Board for 12 years. Jim was a licensed pilot and enjoyed his Beech Bonanza for many years. After retirement, he and Lib enjoyed their home at Rancho Viejo Country Club near Brownsville, TX. He was an avid golfer and he enjoyed playing pitch with his friends.

To order memorial trees or send flowers to the family in memory of James Tibbetts, please visit our flower store.