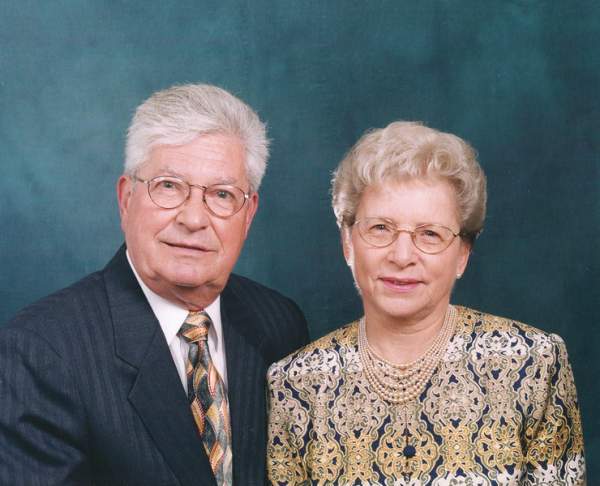 James A. Hill Jr. was born in Belleville, KS to James Hill and Emma (Washburn) Hill on August 30th, 1928, and 15 minutes later he had a companion, his twin brother Jack. While attending Belleville High School, he met Joyce Douglas, his wife of 67 years. During this time, he was active in many local community groups and in particular, he enjoyed serving on the North Central Kansas Free Fair Board as speedway and entertainment manager.

Jim had a great passion for anything on four wheels. He was employed by the Melton Motor car dealership for sixteen years before being hired by the General Motors Corporation, and working his way up to an executive position as heavy duty truck sales manager in charge of U.S. fleet sales. Throughout his career, he mentored several employees that carried his knowledge and spark for leadership into the next generation. On his way up the ladder with GM, he earned the distinction of becoming the youngest zone manager in the company’s history. Jim arranged for the first truck ever to be used as a pace car at the Indianapolis 500, as well as providing trucks to movie studios. Jim and Joyce hosted many GM functions in both the U.S. and abroad throughout the years. Blessed with small town charm and grace, everyone who met Joyce fell in love with her.

After retiring in 1987, Jim branched out into the real estate business while remaining active as a consultant for many car and truck operations.  Thankful for his faith and recent baptism, Jim frequently shared his Pastor’s saying, "I believe in Jesus Christ and the Resurrection, in fact I'm counting on it." He shared, served, gave, loved and poured himself into people his whole life. On the night of his 90th birthday, after celebrating with family he shared, “It’s been a great day, I feel happy go lucky – it’s a good time to go on my trip.” He passed on two days later, September 2nd 2018. And as Jim would say… “And that’s my story.” Rest in peace.

He will be remembered lovingly by his family and friends. Jim is survived by his son Douglas James Hill, of Scottsdale AZ., daughter Barbara Longhofer and spouse Darold, grandsons Stacey and Jeremy, of Overland Park KS., Sisters-in-law Sherry Hill, of Belleville, and Alberta Douglas of Great Bend, Brother-in-law Kenneth Douglas, of Macon, Missouri, as well as many nieces and nephews. Jim was preceded in death by his loving wife Joyce, parents Emma & Jim Hill, brother Jack Hill, sister and brothers-in-law Marjorie and Ed Campbell, Dorothy and John Hooker, Helen and Doug Clark, Shirley Douglas and Max Douglas.

A memorial service will be held 11:00 am, Saturday, September 22, 2018 at Tibbetts-Fischer Funeral Home, Belleville, Kansas. Jim will be laid to rest beside his wife Joyce at the Belleville City Cemetery by his family. In lieu of flowers a donation may be made to one of the following.

Hospice of the Valley

In Memory of James A. Hill, Jr.

To order memorial trees or send flowers to the family in memory of James (Jim) Hill, Jr., please visit our flower store.