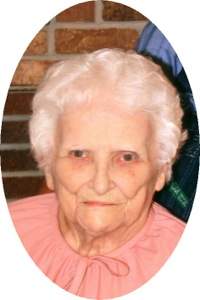 Jean Mach was born October 4, 1926 in to James Grover and Ollie (Esslinger) Largent. She passed from this life Monday, June 14, 2010 at the , , at the age of 83 years. Jean graduated from in 1944. She was a member of the Order of Eastern Star for more than 45 years. Jean enjoyed sewing for herself and family. One of her favorite pastimes was dancing. Many times she was spotted dancing at the kitchen sink while doing dishes or dancing a little jitterbug at the ironing board to the tune of "Rockin Robin." Jean and her husband Ray spent many Saturday nights dancing at the Eagles and American Legion. They sponsored many anniversary dances. She was preceded in death by her parents; brother Seward Largent and her two sons, S.F. (Nub) and Stephen Ketterman. Jean will be forever remembered by her husband Ray of their home; daughter Toni Morrissey, Joplin, Missouri; son-in-law Jerry Morrissey, Webb City, Missouri; stepchildren Terri Paugh and Randy Mach, Belleville, Kansas, Lori Reinke and husband Dan, Milo, Iowa; six grandchildren; seven step grandchildren; eleven great-grandchildren; five step great-grandchildren; other relatives and friends.

Tibbetts-Fischer Funeral Home, , was in charge of these arrangements.

To order memorial trees or send flowers to the family in memory of Jean Mach, please visit our flower store.